Whether in fixed telephone networks or in the field of mobile telephony (with the new 3G systems), traffic in the network is constantly increasing.

With more and more information being transported at higher and higher data speeds, synchronization of traffic in networks is becoming increasingly important. How can you verify that your network is synchronized? And what are the consequences if it is not?

Telecommunications’ reliability is based on data signals being synchronized and clocked using the same clock throughout the network. The basic clock in European telecom networks (SDH, or Synchronous Digital Hierarchy networks) is called E1, and must be exactly 2.048 MHz.

In an SDH network, a cesium clock (2.048 MHz) is used as “master clock” or primary reference clock (PRC). The PRC is distributed through the network with the data signals and regenerated in the network’s nodes in “slave clocks” called synchronization supply units (SSUs). The SSUs regenerate the signal after a chain of SECs (SDH equipment clocks), and can also temporarily be used as a PRC if the connection to the master clock is interrupted. The SECs are the clocks in the network elements (see Figure 1). 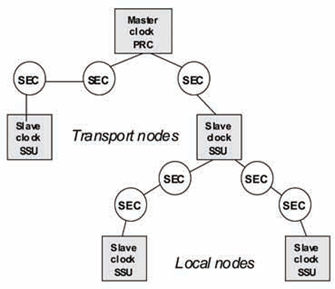 Synchronization of the American SONET hierarchy is basically the same as for SDH. However, another reference frequency (T1) of 1.544 MHz is used, and the terminology refers to Stratum 1 to Stratum 4 levels, instead of PRC, SSU and SEC hierarchical levels.

Please note that the basic E1 lines are normally multiplexed into data streams with higher bit rates before they are transported into the network. A higher multiplexed bit stream is called E3 (34 Mb/s) and is common in radio links, where microwave transmitters/receivers are used instead of optical fibers. In some radio link network nodes, the E1 clock may not be available and measurements have to be made on the E3 level instead.

Phase variations with a frequency content of less than 10 Hz are referred to as wander. If you look at a signal with a lot of wander with an oscilloscope, you will perceive a “sharp” clock signal, which gradually “sways” to and fro (see Figure 2).

Wander occurs in networks for several reasons. The clock regeneration in SDH networks is never completely perfect; rather, each regenerated clock will have variations in frequency and phase. The more nodes passed en route, the less stable the clock will be. Aging of the node clock oscillators and temperature changes can increase wander. Temperature changes cause the expansion and contraction of the transmission cables, which in turn generates wander. For each degree Celsius that the temperature changes, 80 ps of wander is generated per kilometer of optical fiber. For copper cable, the generated wander is 725 ps/km for each degree Celsius change. This may not sound like very much, but  consider how much the temperature can change in one day and add how many kilometers of optical fiber or copper cable there are, and it soon adds up to a considerable amount of wander.

Jitter, which is constant over time, might cause bit errors. However, most jitter can be filtered out in the SSUs and SECs. Wander can only partly be filtered out in the network nodes and it accumulates in the network, causing incorrect synchronization or even a total loss of synchronization. Incorrect synchronization in transport networks may cause severe transmission problems. Voice calls (fixed or cellular) will be lost, fax machines will misprint, and data will be lost or frequently retransmitted. The network operator will have increased service costs and may lose customers—in other words, money.

Wander ought to be measured at installation, during routine checks and whenever changes in network topology are  made. In the first stage of detection of a synchronization fault, wander on the SSU input is measured. Performance  should be verified through regular maintenance to ensure it is within the limits specified in G.822.

Wander variations occur over a period greater than 0.1 s (10 Hz), and vary over time. Therefore, wander measurements must be performed over a longer period of time (e.g., 24 h). Unlike jitter testing, wander testing requires a very stable reference clock (i.e., a Cesium or Rubidium clock).

Wander is measured using time interval error (TIE) values and evaluated according to maximum time interval error (MTIE) and time deviation (TDEV). The basic TIE measurement is the time interval between the actual and the theoretically exact clock pulse edge. TIE is shown graphically as a value measured over the course of long and medium-long periods (minutes to days), and is expressed in nanoseconds or microseconds. MTIE is calculated from the measured TIE curve. It expresses the worst conceivable TIE change for different observation periods (tau). The MTIE value provides information on the dimensions of the buffers. If the MTIE value is exceeded, there is a risk of frame slips. The number of expected slips per day is equal to (frequency offset) x (frames/s) x (seconds/24 h)*. TDEV is also calculated from the measured TIE curve. It expresses the “rms variations in TIE” for different observation intervals. Clear periodicities in the TIE curve will appear as “bulges” in the TDEV curve. For example, a 10 s periodicity in the TIE curve will produce a peak in the TDEV curve for τ =10 s. TDEV gives information about short-term stability, such as random noise.

The frequency offset is revealed in the MTIE graph. The higher the frequency offset for a certain time, the higher the MTIE value for the same time (τ). In ITU-T Recommendation M.2130 “Operational procedures for the maintenance of the transport networks”, the first stage of synchronization fault-finding includes:
– Loss of reference signal input to a clock (SSU, SEC)
– Holdover operation of a clock (SSU, SEC)
– Frequency offset detection on an input (SSU)
– Excessive wander detection on an input (SSU)

Therefore, it is essential to measure and display frequency offset in conjunction with wander; i.e., TIE vs. t.