The Agilent 71451B/11896A Swept-Wavelength PDL Test System provides a high-speed method for measuring PDL across a 1250 to 1600 nm wavelength range. Measurement data examples are shown in Figures 10 and 11. 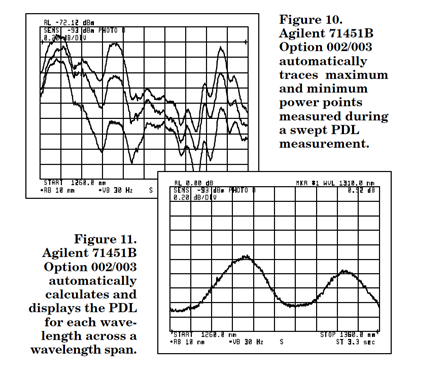 This 14-step procedure enables PDL measurements to be performed over a specified wavelength span. It is assumed that  Agilent 71451B Optical Spectrum Analyzer has already been configured and the PDL down-loadable program card(included with the Agilent 71451B Option 003) has already been installed according to the instructions included with the Option 003 documentation.

1. Activate the swept polarization-dependent loss measurement personality by pressing USER and then PDL.

2. Press Detectr Internal Ext so that Ext is underlined indicating that an external photodetector is being used.

3. Press Source On Off so that On is underlined indicating an On condition.

4. Set the start and stop wavelengths for the measurement using the Start and Stop keys on the keypad.

6. Wait for at least one sweep of the entire wavelength span to be completed and press AUTO SCALE.

10. Use the far right knob to select SCAN RATE: 1 and press ENTER. Refer to the Uncertainty Analysis for this measurement for further information about scan rate selection.

12. When 05:00 (5 minutes) appears in the scan time indicator, press Manual. This stops the polarization scan. Refer to the Uncertainty Analysis for this measurement for further information about a 5 minute scan time recommendation.

13. PDL across the measured wavelength range is automatically calculated and graphically displayed by pressing CALC+DISPLAY. Press AUTO SCALE and marker functions as needed to optimize the view of the measurement trace.

14. To test additional devices, connect a new test device as shown in Figure 12 and return to step #8.

It is assumed that the Agilent 71451B Option 002 white light source is used and the PDL value is between 0 to 5 dB, as shown in Table 2. The Agilent 11896A Polarization Controller scan time should be long enough to allow the maximum and minimum traces (shown in Figure 10) to stabilize. Actual system performance will vary depending upon the individual performance of the specific equipment in the system. 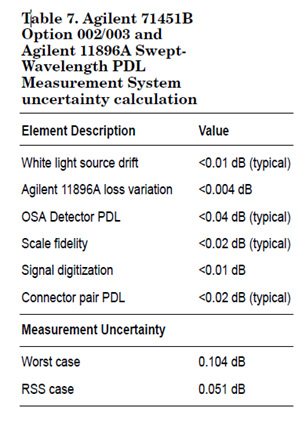 Typical Agilent 71451B Option 002 (white light source option)/003 (swept PDL measurement kit with Agilent 11896A included) settings are shown below. The PDL down loadable program (included with Option 003) automatically sets values to within these typical ranges.

Under these conditions and an Agilent 11896A Polarization Controller scan rate of 1, the Agilent 71451B is able to make an entire sweep at approximately the same polarization state. Over a five minute period, a sufficiently large sampling of random polarization states can be measured in order to accurately measure PDL over a specified wavelength range.