The optical power passing through the aperture from a curved wavefront centred on the fiber endface is given by [1]:

Equation 5-2 forms the basis for the EIA/TIA reference test method for mode-field diameter measurement by the VAFF technique [10]. However, it has been suggested that equation 5-2 is incorrect and that the appropriate version of equation 5-3 is [11]:

where R is the distance from the fiber endface to the edge of the aperture. This is the expression that has recently appeared in ITU-T draft recommendations for an effective area test method [12]. The difference between the two expressions can be understood from Figure 7, which shows the parameters used to derive equations 5-3 and 5-4. The discrepancy arises from which incremental length of the phase front is integrated to give the total power passing through the aperture. Equation 5-4 uses the arc length along the curved wavefront, given by Rdq’ . However, 5-3 uses the projection of this curved section onto a plane parallel to that of the aperture, Rdq’ cos(q’) . Clearly, for small angles cos(q’) » 1 and the difference between the two formulations is minimised. It has been shown that they lead to a difference in calculated MFD of typically less than 0.5% – even for dispersion shifted fibres with the smallest cores and broadest far-fields [11]. 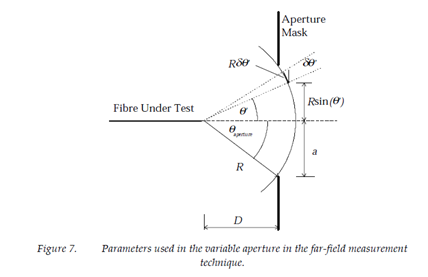 depending on whether the aperture power function is assumed to follow from equation 5-2 or 5-4 respectively.

The basic experimental setup for the variable aperture technique is shown below in Figure 8. Apertures of different diameters are usually precision mounted on a wheel so that they can be easily changed and the throughput power measured for each one. Figure 9 shows an example of measured VAFF data for a matched-cladding fiber. 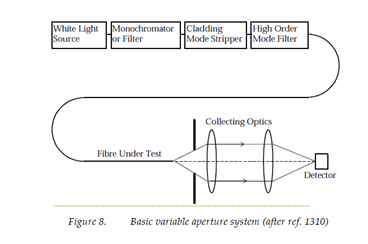 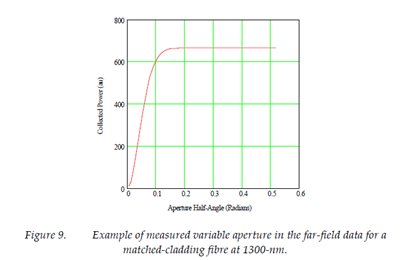 The equipment used in our investigations was a PK Technology S25 measurement system including an internal tungsten halogen lamp filtered using a monochromator with 10-nm spectral width. The wavelength calibration uncertainty is estimated to be less than ±2-nm. Twenty three apertures were used, giving a range of collection numerical apertures  (= sin(qaperture ))  from 0.0066 to 0.4948.