General
The minimum wavelength at which an optical fiber will support only one propagating mode is referred to as the cutoff wavelength. If the system operating wavelength is below the cutoff wavelength, multimode operation may take place and the introduction of an additional source of dispersion may limit a fiber’s information carrying capacity.

It’s important to note that the physical deployment of the fiber plays an important role in defining the region of single-mode operation. Typical deployment conditions for cabled fibers in the field, with varying lengths and bend configurations, will typically shift the actual cutoff to shorter wavelengths than the measured fiber cutoff wavelength (λCF). Therefore, the cabled fiber cutoff wavelength (λCC) is of more interest to the cabler because it’s a more accurate representation of the cutoff wavelength that can be expected in actual use. Because cabling the fiber tends to shift the cutoff to shorter wavelengths, a conservative estimate of cabled cutoff can be made by measuring uncabled fiber in the cable cutoff configuration(λCCF).

A multimode fiber is used as the reference fiber to permit mapping out the spectral response of the measurement system. To determine the cutoff wavelength, Am(λ) is plotted against wavelength. A straight line is fitted to the long-wavelength back slope of the plot and dropped 0.1 dB. As depicted in Figure 1, its subsequent intersection with the curve denotes the cutoff wavelength. An optimal fit can be used to control
errors in the transition zone. 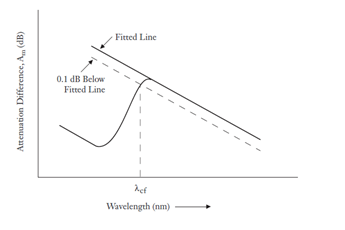 The fiber ends are stripped of coating and prepared with end angles less than 2° with a near-perfect
mirror surface. Cladding mode stripping is also provided.

The sample fiber is deployed in accordance with TIA standard (see references) as shown here.

Figure 2
The test sample shall be 2 meters of fiber deployed in a single turn of constant radius of 140 mm. There shall be no additional bends less than 140 mm radius. A typical deployment is shown in Figure 2. 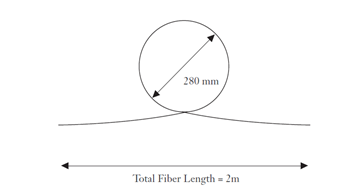 Figure 3
The test sample shall be 22 m of uncabled fiber coiled into a loop with a minimum radius of 140 mm to conservatively simulate cabling effects. To simulate the effects of a splice organizer, apply two loop of 80 mm diameter near one end, as shown in Figure 3. For fiber designs where the 22 m cable cutoff measurement agrees with a surrogate 2-meter measurement (2 loops @ 80 mm diameter), the 2-meter surrogate measurement is used. 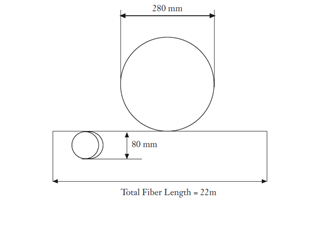