The demand for increased bandwidth is constant, and to avoid investing huge amounts in new systems, most operators, if not all of them, are looking to re-use their existing fiber infrastructure. This, however, poses a problem because the standard train of “1” and “0”, called on-off keying (OOK), simply can’t be pushed any further on most of the installed bases.

To resolve this issue, system vendors have introduced higher bits per symbol modulation formats. One of the most popular ones is called DP-QPSK: dual polarization quadrature phase shift keying. Unfortunately, direct detection used with OOK doesn’t work with such modulation formats. For this reason, these DP-QPSK are often referred to as coherent detection systems, which is a way to retrieve information despite a fiber’s physical impairments, such as chromatic dispersion and polarization mode dispersion.

While it is true that these systems offer more tolerance against these impairments, they are not immune to them. For example, the typical marketing specification for average PMD tolerance is 25 ps. While this is true in theory, for a real world system, this doesn’t mean much because such a system might already have issues at 10 ps; the exact same limiting value as 10 Gbit/s. The issue is that at NRZ, this higher temporary PMD value only causes a few bit errors, which in many cases can be compensated by the FEC. In a coherent system, this high PMD can cause the whole DSP to fail, which will result in a complete service outage that may last only afew seconds or require a complete reboot.

Even though it’s not perfect, a coherent system is much more robust and reliable, and it’s the only cost-effective way to gain significant bandwidth as service providers look to upgrade to 100 GigE.

Since they do provide robustness and reliability and can tolerate greater physical impairments, coherent systems are deployed on much longer routes, typically backbone or core fiber spans. However, this means that extra amplification is required. To keep the upgrade to these new systems in the infrastructure to a minimum and ensure a financially viable solution, some limitations must be considered. The main limitation of DP-QPSK and coherent detection is optical signal-to-noise ratio (OSNR). These system upgrades will require higher OSNR. Since these fiber spans will be very long and the signal will need to be amplified or pumped to travel that extra distance, signal boosts need to be obtained with low-noise amplification piggy-backed on current ones. Raman amplification is therefore very popular in most coherent systems because the goal of the Raman is to increase optical power at the EDFA input in order to improve OSNR, whether they are green field or brown field.

While EDFA uses a specially doped fiber as an amplification medium, Raman is gain that is distributed throughout the transport fiber itself. Raman pump can be either co-propagating, i.e. connected to the TX port and directly boosting the signal at the TX port, or counter propagating,  i.e. connected to the RX port and pumped energy is coupled upstream to the traffic, giving more amplification to the signal when it becomes weaker, instead of directly at the TX. The OSNR can be improved by as much as 11 dB, which is critical to coherent signal deployment.

Since Raman uses the transmission fiber as the amplifying medium, fiber quality is a major consideration. Gain performance is highly dependent on fiber plant, which includes the loss. Splice loss, Fresnel reflections and fiber attenuation are taken into account during the engineering stage. Poor splice loss and patch panel quality can impact the achievable gain by reducing the Raman power that gets into the fiber. Macrobends in the patch panel area have also become a source of concern. Due to the high power pumped by the Raman, dirty or poorly mated connectors have proven to be an issue as well. Cleaning is needed.

The gain is also a function of the effective area of the fiber. Since Raman uses the transmission fiber as the amplifying medium, core size is a factor in the gain that is created. Smaller fiber cores will translate into higher power density and therefore higher gain, just as larger core sizes will translate into lower power density resulting  in lower gain. We can therefore conclude that a successful Raman design should include the effective area of the fiber, which can be determined by knowing the fiber type (SMF-28 (G.652), LEAF, True Wave). The same amount of pump power provides different gain in different fiber types.

It is common procedure to know the fiber type, i.e. the effective area, when designing and installing the Raman pump. This allows us to adjust the pump accordingly (see figure 2). 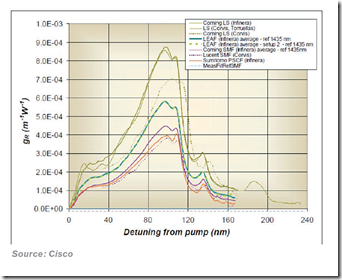 As demonstrated above, the key to proper Raman Gain adjustment, i.e. proper gain, depends mostly on the fiber type. Fiber type must be known at the design level (Raman gain). This is not usually an issue in green field situations, because engineers typically know what they have installed. However, in brown field applications, legacy fibers will have been handled by many technicians, added through mergers or acquisitions, rerouted without proper documentation or their history may have simply disappeared. During the engineering stage, the setup tool requires that the fiber type serve as input for each span between pumps. When the fiber type is not known, the design assumes the fiber type to be SMF-28, G.652. What is the impact of not knowing the effective area in the fiber? The Raman gain could be incorrectly engineered.

As stated earlier, the same amount of pump power provides different gain in different fiber types. Raman applications include longhaul, multi-span systems. The setup requires that spans be configured sequentially from the node where the TX signals originate and then, from pump to pump along the span. This will include dB loss, fiber length and fiber type. If the span is bidirectional, Raman pumps will be scripted in one direction until the signal reaches the end and then scripted in the opposite direction. If the design was incorrectly done for a specific fiber type because of poor or no documentation or because the wrong type of fiber between the pump sites was assumed, turn up could be shut down; meaning additional engineering time. Most of system turn-ups require many technicians at the pump sites during short maintenance windows. Repeat truck rolls can be costly and time-consuming. In some instances, multiple fiber types can be used to connect the TX and RX in the network. This too needs to be considered because the design tools do not currently allow for mixed fiber type input, but the identification of the dominant fiber type is required in the first 50 km.

As stated at the beginning of this paper, tolerance to chromatic dispersion in coherent systems is very high, so compensation is not necessarily required. However, a chromatic dispersion (CD) test can provide much more insight, especially a single-ended one, which also measures fiber length.

Plus, every fiber type has a signature, which includes a CD coefficient, CD slope and Lambda-Zero.

CD coefficient is the CD by unit of length, in kilometers. This implies that the exact fiber length is known. When the CD unit is a single-ended one, reflectometry can be used to measure length, and therefore, obtain the coefficient.

Here are examples of fiber signatures: 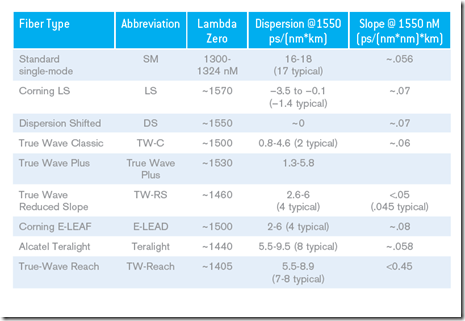 Once an operator has tested the fiber span for chromatic dispersion, the overall ps/nm may not be needed for the coherent signal. However, the overall ps/nm may be used with the fiber length determined by the single-ended dispersion analyzer to calculate the ps/nm/km at 1550 nm. It can also be used with the dispersion slope and the lambda zero to determine fiber type. For example, a large service provider deploying 100GigE coherent detection signals, which include a counter-propagating Raman pump, must test the 40 km span for loss, ORL and chromatic dispersion. The CD measurements yield 4.48 ps/nm/km and a lambda zero at 1500.27 nm. Based on the chart above, this 40 km span is most probably Corning E-LEAF fiber and the data in the design tool suggests turning up the Raman pump. If the fiber type was
unknown, the design tool for the pump would have assumed a standard single mode fiber and there would have been a higher gain than expected possibly causing four-wave mixing (FWM) or other non-linear effects.

A good portion of today’s DWDM networks contain Raman pumps. Raman pumps require the fiber type to be known at the system design and optimization stages to be able to determine the proper gain. A very effective way to do this is to measure the chromatic dispersion parameters of the fiber, on a span per span basis. The advantage of single-ended testers is two-fold here: they automatically measure the fiber length, and the CD coefficient. This removes the need to shoot with an OTDR or to rely on (potentially erroneous) data. Moreover, since multi-spans over great distances must be characterized, doing this with end-to-end test sets requires much more effort: not just 2 people, but 2 people that need to travel and synchronize their presence.

Full fiber characterization, including chromatic dispersion, remains an important step when designing systems using legacy fiber. It’s just as important in the design of coherent-detection based systems, but for entirely new reasons. The data collected from the tests can help save days of work, increase time to revenue and significantly decrease your operating expenses.