Radio over Fiber (RoF) refers to an analog transmission over fiber technology whereby light is amplitude modulated by a radio signal and transmitted over an optical fiber link to facilitate wireless access.

Although radio transmission over fiber is used for multiple purposes, such as in cable television (CATV) networks and in satellite base stations, the term RoF is usually applied when this is done for wireless access.

In RoF systems, wireless signals are transported in optical form between a central station and a set of base stations before being radiated through the air. Each base station is adapted to communicate over a radio link with at least one user’s mobile station located within the radio range of said base station.

RoF transmission systems are usually classified into two main categories (RF-over-Fiber; IF-over-Fiber) depending on the frequency range of the radio signal to be transported.

>> How does Radio over Fiber Work?

An RF signal can be transmitted, up to many GHz depending on the laser and its modulation scheme. The RF Out must be amplified to provide a useable signal. 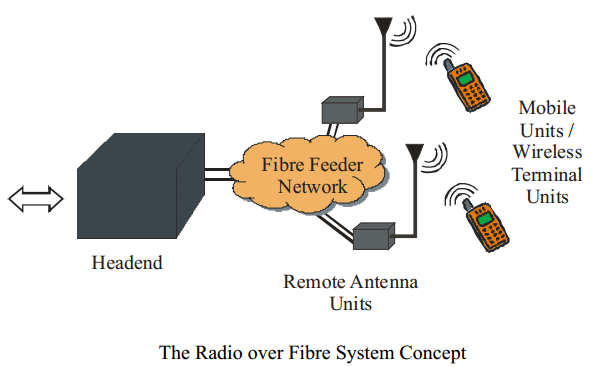 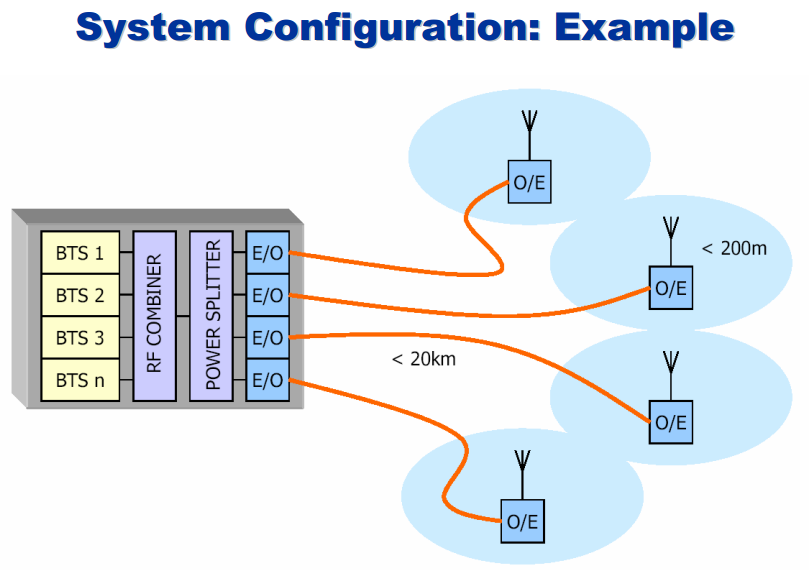 In narrowband communication systems and WLANs, RF signal processing functions such as frequency up-conversion, carrier modulation, and multiplexing, are performed at the BS or the RAP, and immediately fed into the antenna.  RoF makes it possible to centralize the RF signal processing functions in one shared location (headend), and then to use optical fiber, which offers low signal loss (0.3 dB/km for 1550 nm, and 0.5 dB/km for 1310 nm wavelengths) to distribute the RF signals to the RAUs.

By so doing, RAUs are simplified significantly, as they only need to perform optoelectronic conversion and amplification functions.

It is a well known fact that signals transmitted on optical fiber attenuate much less than through other media, especially when compared to wireless medium. By using optical fiber, the signal will travel further reducing the need of repeaters.

RoF makes use of the concept of a Remote Station (RS). This station only consists an optical-to-electrical (O/E) (and an optional frequency up or down converter), amplifiers, and the antenna. This means that the resource management and signal generation circuitry of the Base Station can be moved to a centralized location and shared between several remote stations, thus simplifying the architecture. 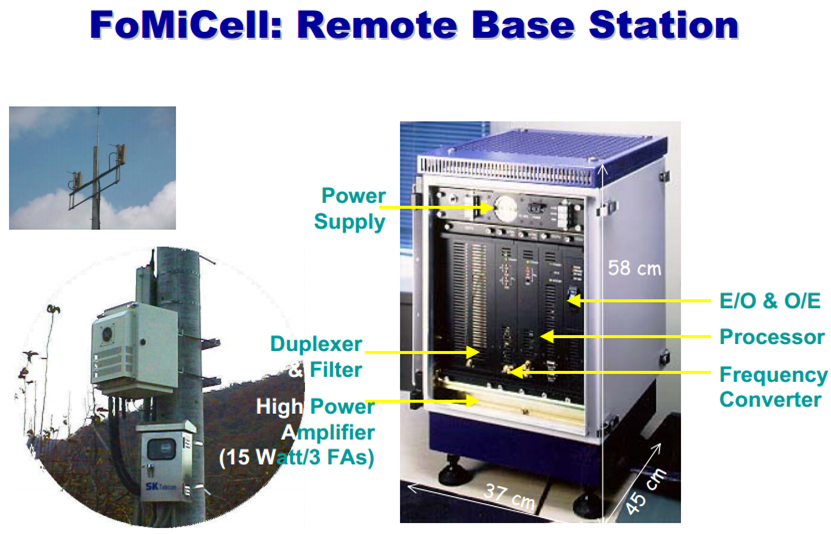 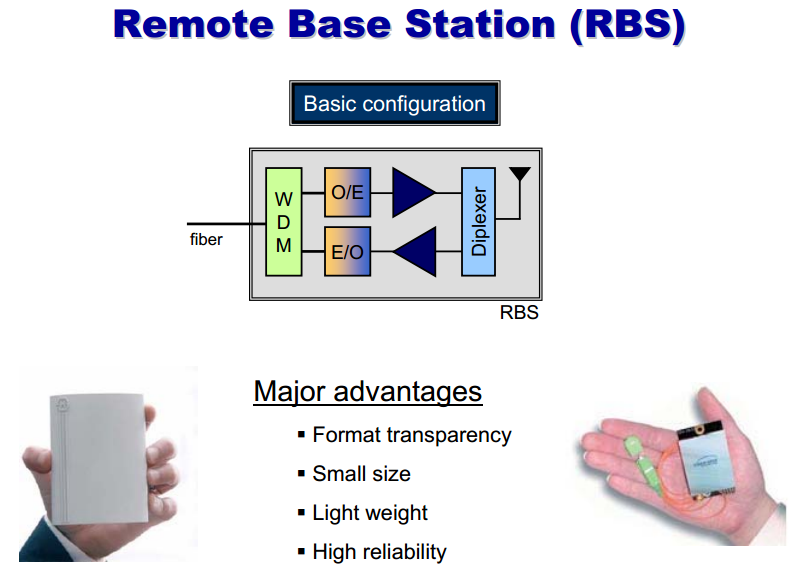 Simpler structure of remote base station means lower cost of infrastructure, lower power consumption by devices and simpler maintenance all contributed to lowering the overall installation and maintenance cost. Further reduction can also be made by use of low cost Graded Index Polymer Optical Fiber.

Fiber Optics are designed to handle gigabits speeds which means they will be able to handle speeds offered by future generations of networks for years to come. RoF technology is also protocol and bit-rate transparent, hence, can be employed to use any current and future technologies. 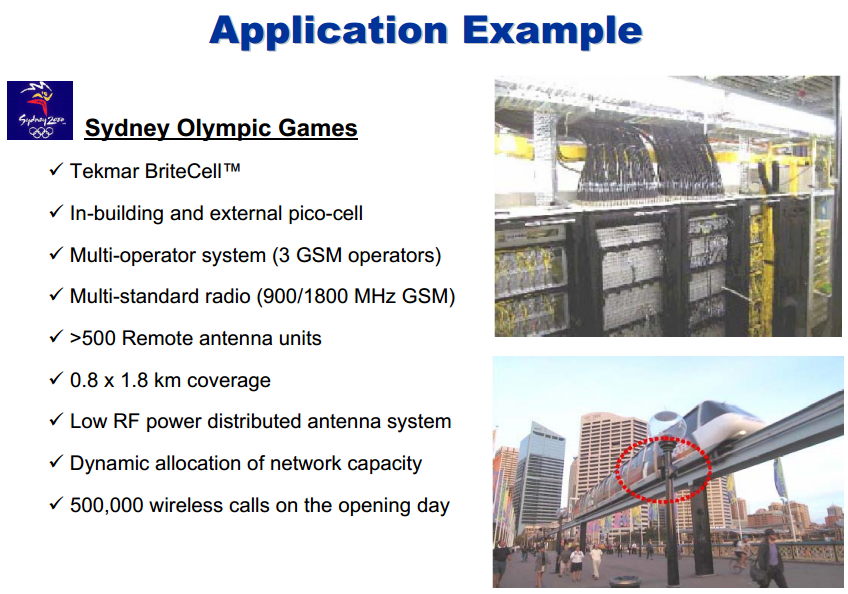 An important application of RoF is its use to provide wireless coverage in the area where wireless backhaul link is not possible. These zones can be areas inside a structure such as a tunnel, areas behind buildings, Mountainous places or secluded areas such as jungles.

2. FTTA (Fiber to the Antenna)

By using an optical connection directly to the antenna, the equipment vendor can gain several advantages like low line losses, immunity to lightening strikes/electric discharges and reduced complexity of base station by attaching light weight Optical-to-Electrical (O/E) converter directly to antenna.

One of the pioneer RoF system implementations is depicted in the following figure. Such a system may be used to distribute GSM signals, for example.

The RF signal is used to directly modulate the laser diode in the central site (headend).  The resulting intensity modulated optical signal is then transported over the length of the fiber to the BS (RAU).

At the RAU, the transmitted RF signal is recovered by direct detection in the PIN photodetector.  The signal is then amplified and radiated by the antenna.  The uplink signal from the MU is transported from the RAU to the headend in the same way.

This method of transporting RF signals over the fiber is called Intensity Modulation with Direct Detection (IM-DD), and is the simplest form of the RoF link.

1. IF over Single Mode Fiber (SMF) and Multimode Fiber (MMF) 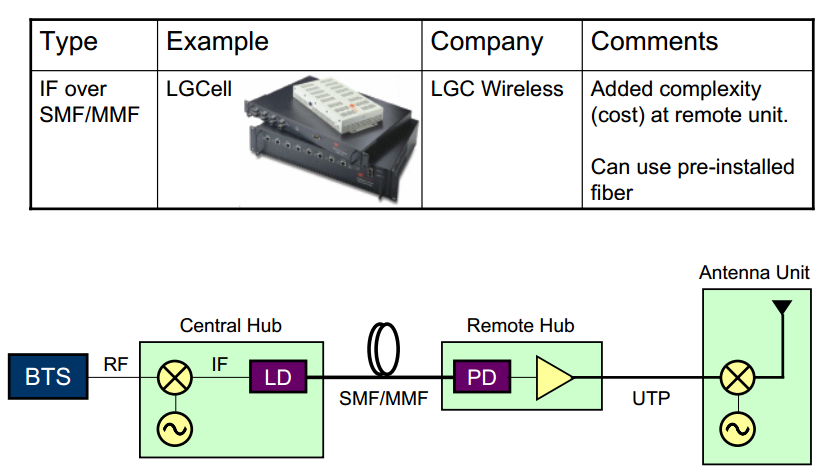 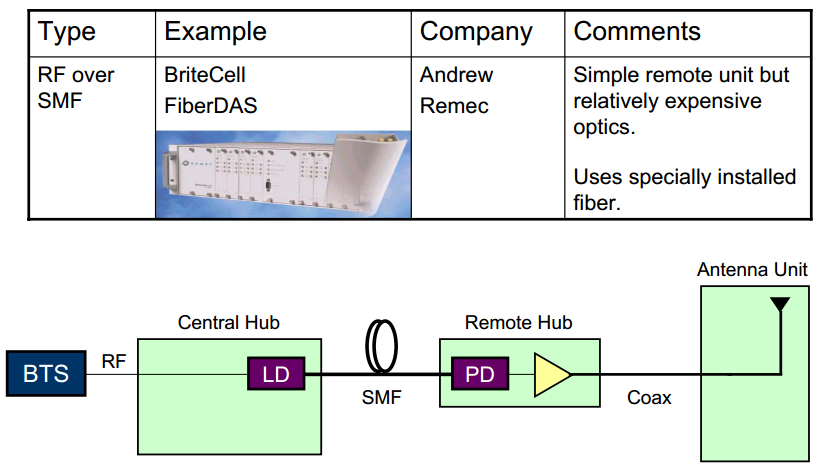