What is Fiber Bragg Grating – FBG

Normal optical fibers are uniform along their lengths. In a simple fiber Bragg grating, the refractive index of the fiber core vary periodically along the length of the fiber, as shown in the following figure.

As shown in the above figure, the refractive index of the fiber core is modulated with a period of
Λ. When a light with a broad spectrum is launched into one end of fiber containing a fiber Bragg grating, the part of the light with wavelength matching the Bragg grating wavelength will be reflected back to the input end, with the rest of the light passing through to the other end. This reflection phenomena is explained in the following figure.

From the momentum conservation requirement of the Bragg grating condition, the following equation can be obtained:

where neff is the effective refractive index of the fiber core, and
λB is the wavelength of the light reflected by the Bragg grating.

Therefore, the Bragg grating wavelength λB can be expressed as

Note that the Bragg grating wavelength is the function of the effective index and the period of the grating.

Fiber Bragg grating can be used as a MUX/DEMUX device in WDM systems for extracting a signal (channel) with a particular wavelength from a stream of signals (channels). This is shown in the following two pictures.. 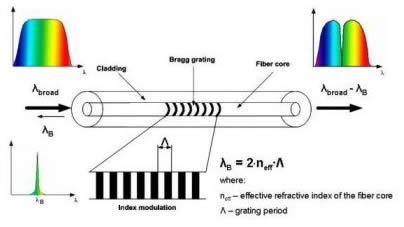 Reflection and Transmission in Fiber Gratings

The fundamental principle behind the operation of fiber Bragg grating (FBG) is Fresnel reflection. Where light traveling between media of different refractive indices may both reflect and refract at the interface.

The fiber Bragg grating will typically have a sinusoidal refractive index variation over a defined length. We have seen the definition of Bragg wavelength λB from the previous section.

The wavelength spacing between the first minima, (as shown in above figure), or the bandwidth
Δλ is given by,

where
δn0 is the variation in the refractive index (n3-n2), and
η is the fraction of power in the core.

The structure of the FBG can vary via the refractive index, or the grating period. The grating period can be uniform or graded, and either localised or distributed in a superstructure.

There are six common structures for Fiber Bragg Gratings;

Refractive Index Profile in the Core

How to Make a Fiber Bragg Grating Device

Fiber Bragg gratings, which operate at wavelengths other than near the writing wavelength, are fabricated by techniques that broadly fall into two categories: those that are holographic and those that are noninterferometric, based on simple exposure to UV radiation periodically along a piece of fiber.

The holographic techniques use a beam splitter to divide a single input UV beam into two, interfering them at the fiber.

The noninterferometric techniques depend on periodic exposure of a fiber to pulsed sources or through a spatially periodic amplitude mask.

Here we only introduce the holographic approach with a bulk interferometer.

The interferometer is one encountered in standard holography, with the UV beam divided into two at a beam splitter and then brought together at a mutual angle of
θ, by reflections from two UV mirrors. This method allows the Bragg wavelength to be chosen independently of the UV wavelength.

Another use of fiber gratings is to compensate for chromatic dispersion in an optical fiber. The grating serves as a selective optical delay line, which adjusts the transit times of different wavelengths in a pulse so they are approximately equal.

For example, the longer wavelengths in a pulse arrived first, and the shorter wavelengths arrived last. As shown in the following figure, the Bragg grating is made so segments which reflect different wavelengths are in different positions along the length of the grating.

Layout of a Fiber Bragg Grating Based Dispersion Compensation Module

As well as being sensitive to strain, the Bragg wavelength λB is also sensitive to temperature. This means that fiber Bragg gratings can be used as sensing elements in optical fiber sensors.

Fiber Bragg gratings can then be used as direct sensing elements for strain and temperature.