1. What Is a Wavelength Selective Switch (WSS)? 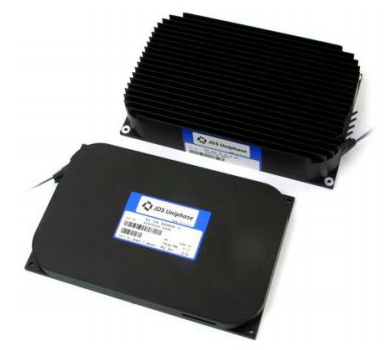 WSS can dynamically route, block and attenuate all DWDM wavelengths within a network node. The following figure shows WSS’s functionality. 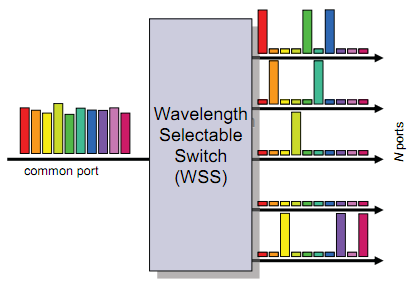 This wavelength switching (routing) process can be dynamically changed through a electronic communication control interface on the WSS. So in essence, WSS switches DWDM channels or wavelengths.

There are also variable attenuation mechanism in WSS for each wavelength. So each wavelength can be independently attenuated for channel power control and equalization.

There are several WSS switching engine technologies on the market today, here we will demonstrate a MEMS based design. The different switching technologies will be discussed in the next section.

The following figure shows a diffraction grating and MEMS based 1×2 wavelength selective switch.

The light from a fiber is collimated by a lens with focal length f and demultiplexed by diffraction off the grating.

The reflected light passes through the lens and is wavelength-multiplexed by diffraction off the grating, and finally the lens couples the light back into the fiber.  The output light is separated from the input light by a circulator.

1XN switches can be cascaded to form larger architectures, and NxN wavelength selective matrix can be built by interconnecting back-to-back 1XN switches.

Let’s look at the optical design of the 1XN wavelength selective switch (WSS). 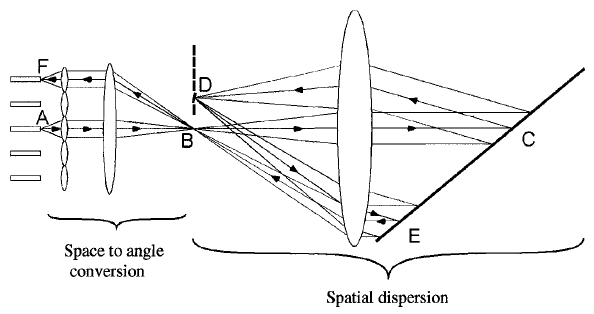 In the 1xN switch design, it uses an additional lens in Fourier transform configuration to perform a space to angle conversion in the first stage of the switch. Also the 1xN switch will require tilt mirrors with N different tilt angles. These are usually implemented as analog mirrors.

Here is how the design works.

This MEMS based switch can switch as many as 128 wavelengths with 50 GHz spacing. The total insertion loss is less than 6 dB. It uses a 100mm focal length mirror and a 1100 lines/mm grating. The micromirrors can be actuated by +/- 8° using a voltage of <115V and the switch can be used as variable attenuator by detuning the tilt angle of the micromirrors.

The optical design we discussed in the previous section is based on MEMS micromirrors. Here we will discuss several more switching engine technologies. 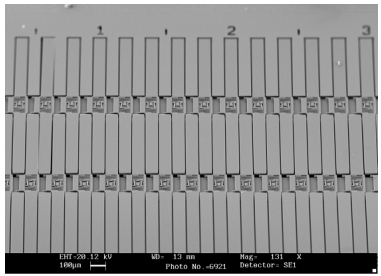 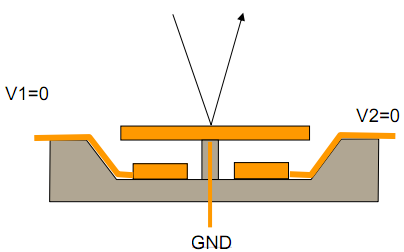 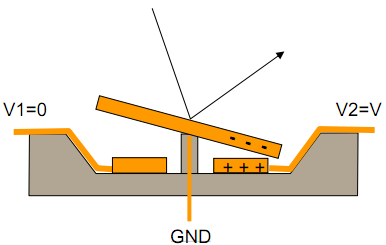 When voltage is applied to electrode, it causes mirror to tilt due to electrostatic attraction. Attenuation is provided by tilting to offset the beam slightly at the output fiber. A angle-to-offset lens converts beam tilt to beam displacement at an input/output fiber array.

The advantage is that offset perpendicular to wavelength dispersion direction gives attenuation with no change in channel shape as shown below. 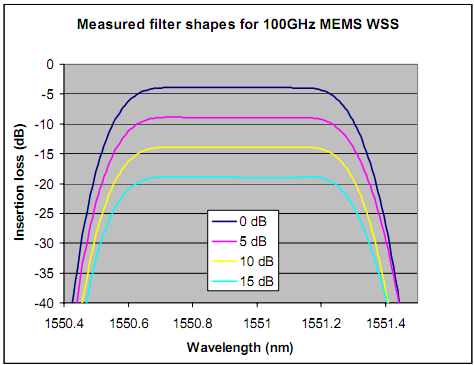 Liquid crystal cell selectively controls the polarization state of transmitted light by application of a control voltage as shown below. 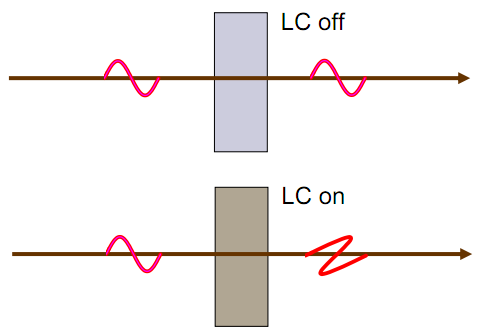 For the switching process to work, the liquid crystal cell (LC) must be followed by a polarization dependent optical element such as a PBS (Polarization Beam Splitter) to change the path of the transmitted light based on their polarization. 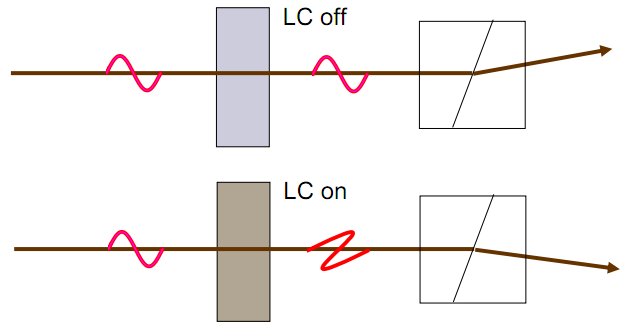 Random polarized input must be separated into two orthogonal polarizations.

The following two graphics show Liquid Crystal on Silicon (LCoS) technology and the optical design of an wavelength selective switch based on LCoS switching technology.

A LCoS-based switch engine built uses an array of phase controlled pixels to implement beam steering by creating a linear optical phase retardation in the direction of the intended deflection.

LCOS is a display technology which combines Liquid Crystal and semiconductor technologies to create a high resolution, solid-state display engine. In WSS design, the LCoS is used to control the phase of light at each pixel to produce an electrically-programmable grating. This can control the beam deflection in a vertical direction by varying either the pitch or blaze of the grating whilst the width of the channel is determined by the number of pixel columns selected in the horizontal direction.

In the WSS design, it incorporates polarization diversity, control of mode size and a 4-f wavelength optical imaging in the dispersive axis of the LCoS providing integrated switching and optical power control.

In operation, the light passes from a fiber array through the polarization diversity optics which both separates and aligns the orthogonal polarization states to be in the high efficiency s-polarization state of the diffraction grating. The light from the input fiber is reflected from the imaging mirror and then angularly dispersed by the grating, reflecting the light back to the cylindrical mirror which directs each optical frequency (wavelength) to a different portion of the LCoS. The path for each wavelength is then retraced upon reflection from the LCoS, with the beam-steering image applied on the LCoS directing the light to a particular port of the fiber array. 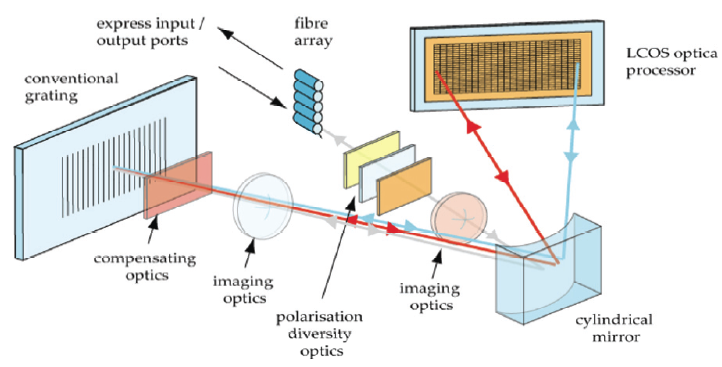 Some switching engine technologies require a minimum beam size to function properly, and thus place a limit on the minimum optical system length for a give channel passband width, channel spacing, and dispersive element.