:: What Is an Photodetector? 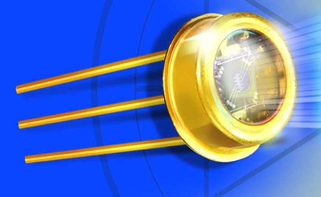 An optical detector is a device that converts light signals into electrical signals, which can then be amplified and processed. The photodetector is as essential an element of any fiber optic system as the optical fiber or the light source. Photodetectors can dictate the performance of a fiber optic communication link.

Semiconductor photodiodes are the most commonly used detectors in optical fiber systems since they provide good performance, being small in size, and are of low cost.

Semiconductor photodiodes are made of silicon, germanium, GaAs, InGaAs, etc.

:: How Does a Photodetector Work?

The following illustration shows how a photodetector work. The detector is electrically reverse-biased. (In contrary, LEDs and Lasers are forward-biased to emit light).

In the first illustration when there is no light, the reverse bias draws current-carrying electrons and holes out of the p-n junction region, creating a depleted region, which stops current from passing through the diode.

In the second illustration when there are lights on the detector, photons with the proper energy (wavelength) can create electron-hole pairs in this region by raising an electron from the valence band to the conduction band, leaving a hole behind. The bias voltage causes these current carriers to drift quickly away from the junction region, so a current flows proportional to the light hitting the detector.

The wavelengths at which the detector responds to light depend on the detector’s material composition.

As we said above, the wavelength that a photodetector can respond to depends on its composition. The following graph shows the detector response curve for different materials.

The most common semiconductor photodetector is the PIN photodiode as shown below. 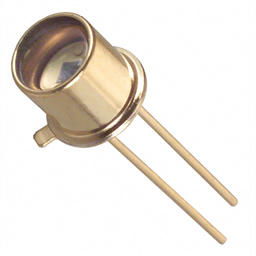 PIN photodiode has an intrinsic (very lightly doped) semiconductor region sandwiched between a p-doped and an n-doped region (as shown below). 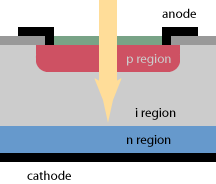 The PIN photodiode is reverse-biased as shown above. Since the intrinsic (i) region has no free charges, its resistance is high, so that most of the reverse-biased voltage is applied to this i region.

The i region is usually wide so that incoming photons have a greater probability of absorption in the i region rather than in the p or n regions.

Sensitivity measures the response to an optical input signal as a function of its intensity. Photodetector’s sensitivity can be measured in two concepts: quantum efficiency and responsivity.

We will focus on quantum efficiency in this section, and we will introduce responsivity in the next section.

Quantum efficiency
η measures the fraction of incoming photons that generate electrons at the detector. It is defined as

Quantum efficiency
η is the ratio of the number of electron-hole (e-h) pairs generated to the number of incident photons. It can by calculated by

R is the reflection coefficient at the air-semiconductor surface

α is the absorption coefficient

ω is the distance where optical power is absorbed

Responsivity is the ratio of electrical output from the detector to the input optical power. If the output current varies proportionally to the input, this is measured as amps per watt (A/W). Since in fiber optic communication systems, input powers are usually in microwatt level, responsivity is often expressed as uA/uW.

The responsivity
ρ is the photo current generated per unit optical power. The following formula shows how to calculate responsivity.

λ0 is measured in um (micrometers)

η is the quantum efficiency

The following figure shows the spectral dependence of responsivity and quantum efficiency for different semiconductor materials.

3. Speed of Response and Bandwidth

The speed of response and bandwidth of a photodetector depend on three factors.

Rise time is the time the output signal takes to rise from 10% to 90% of the peak value after the input is turned on instantaneously.

Fall time is the the time the output signal takes to drop from 90% to 10% of the peak value after the input is turned off abruptly. 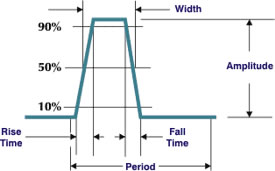 Detector bandwidth usually is defined as the frequency at which the output signal has dropped to 3dB (50%) below the power at a low frequency. This means that only half as much signal is getting through the detector at the higher frequency.

In a square wave function, the highest frequencies are responsible for the sharp edges. Frequencies higher than the bandwidth frequency (50%) are attenuated even more. As bandwidth decreases, the pulses become more rounded.

Dark current is the current through the photodiode in the absence of light, when it is operated in photoconductive mode. The dark current includes photocurrent generated by background radiation and the saturation current of the semiconductor junction.

Dark current sets a floor on the minimum detectable signal, because a signal must produce more current than the dark current in order to be detected. Dark current depends on operating temperature, bias voltage, and the type of detector.

Noise-Equivalent Power (NEP) is the minimum input optical power to generate photocurrent, equal to the rms noise current in a 1 hertz bandwidth.

This more directly measures the minimum detectable signal because it compares noise directly to optical power.

NEP depends on the frequency of the modulated signal, the bandwidth over which noise is measured, the detector area, and the operating temperature.