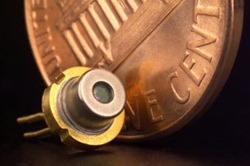 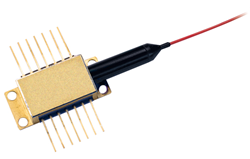 Laser Diodes (LD) are very commonly used in fiber optic communication systems and their characteristics are of primary importance. So here we give a summary of LD’s characteristics.

The increase in the number of electrons injected per unit time into the laser is dI/e, where e is the electronic charge. The additional number of photons exiting the laser is dP/hv, where v is the frequency of the radiation and h is the Planck constant. Differential external quantum efficiency of the laser ηD is defined as 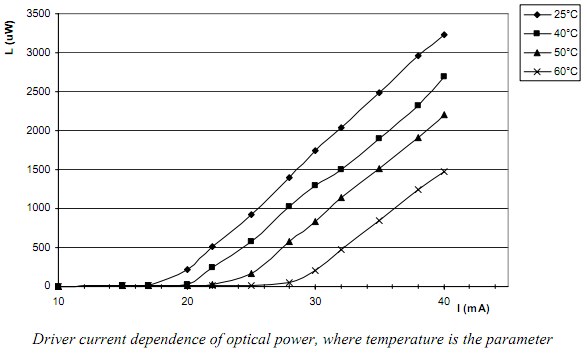 Laser diodes’ threshold and output power have a strong dependence on temperature. The above figure shows the P/I curve at different temperatures.

where I0 is a constant and T0 is known as the characteristic temperature of the diode. Typically, Ith is about 0.6-1% per °C for GaAlAS lasers.

When LDs are under threshold current, they behave like a LED and the output light come from spontaneous emission. As a result, the output wavelength spectrum is very broad just as LEDs do. The following figure shows the output spectrum of a laser diode when injected current is under its threshold.

In a multilongitudinal laser, the output spectrum consists of a series of wavelengths (as the peaks shown in above figure).

Each wavelength in the figure is called a longitudinal mode. When the frequency spacing Δv between adjacent modes is far less than the frequency v itself,  Δv can be calculated with the following equation.

where n is the refractive index of the semiconductor material, l is the cavity length.

Multilongitudinal lasers have a significant disadvantage in fiber optic communication system – they lead to larger pulse dispersion. (You can refer to this optical fiber dispersion tutorial). So in practical fiber optic systems, we almost always use single longitudinal mode laser.

In single longitudinal laser, some components or mechanisms are built into the laser cavity that result in a loss for all longitudinal modes except one. Only this low loss longitudinal mode can oscillate. The following figure shows this type of laser’s spectrum. 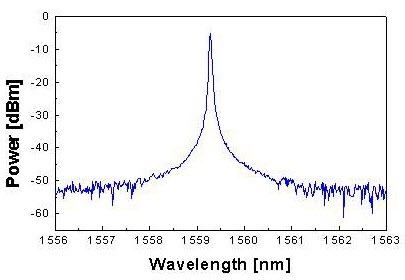 A distributed feedback laser (DFB) is the most popular single longitudinal mode laser as we introduced above. In a DFB laser, the active region of the device is periodically structured as a diffraction grating. The structure builds a one dimensional interference grating and the grating provides  optical feedback for the laser.

DFB laser diodes do not use two discrete mirrors to form the optical cavity as in conventional laser design. The grating acts as the wavelength selective element for at least one of the mirrors and provides feedback, reflecting light back into the cavity to form the resonator. The grating is constructed so as to reflect only a narrow band of wavelengths, and thus produce a single longitudinal lasing mode.

You can see the structure and output spectrum of a DFB laser in the following figure.

Most laser structures for optical fiber communication operate under a single transverse mode condition. We can approximate the mode field distribution by a Gaussian function with two different widths along the transverse (wT) and lateral (wL) direction, as shown below.

where x and y represent axes parallel and perpendicular to the junction plane.