Each type of system is defined by NEC (National Electrical Code) in different sections of the NEC. Each system requires its own cabling system and usually is bid and built by separate contractors.

Most commercial businesses require more than one phone line, so that employees can receive phone calls while other employees are making phone calls. This is supported by a phone switch. Each telephone is connected to the phone switch using UTP (Unshielded Twisted Pair) copper cable. This is shown in the following figure. 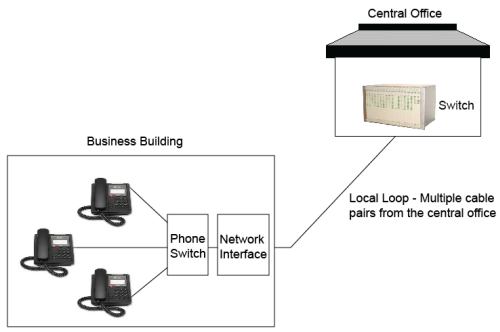 Small businesses with fewer employees typically use small phone switches called Key Service Units (KSU). A KSU is designed to support a fixed number of phone lines and telephone extensions. A typical KSU supports up to eight phone lines coming from the Local Exchange Carrier (LEC, the phone company), and up to 32 telephone extensions. A KSU phone system is shown below. 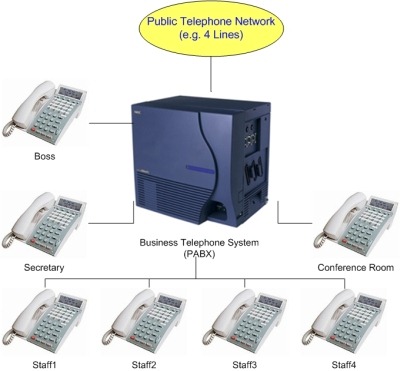 Mainframe and minicomputer data systems were popular in the 1960s, 70s, and 80s. They have mostly been replaced by LAN (Local Area Network) systems. (We will talk about LAN in the next section).

Because minicomputers were not as powerful as mainframes, they supported only small number of terminals.

In 1980, IBM produced the first Personal  Computer (PC) and LAN (Local Area Network) was designed to link PCs together and enabled them to communicate. The term LAN is defined as “a data communication system allowing a number of independent devices to communicate directly with each other and within a moderately sized geographic area.”

A LAN is composed of at least of the following components.

Each station on the LAN must have a dedicated cable connection to a port on the hub.

Building Automation and Control Systems (BACS) are build systems that regulate a building’s environment or monitor it for safety or security purpose.

The following systems are all part of a BACS system.

The HVAC system provides building temperature, humidity, and environmental control. It has a centralized control unit, and thermostats placed throughout the building.

Thermostats are connected to the control unit with cable and preset thresholds will trigger the centralized control unit to turn on a mechanical system to adjust the air pressure, rate of air flow, and fan speeds.

A fire alarm system consists of the follow components. 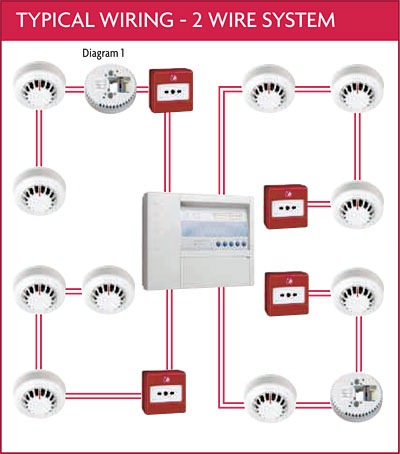 Security systems include the following types:

Security systems are often integrated with access controls systems together.

The security system is made up of the following components:

The sensors and magnetic contacts are distributed throughout the building and connected back to the control unit with communication cable. The security system monitors glass breaking, motion, or separation of the magnetic contact points on doors and windows.

Access control system is made up of the following components: 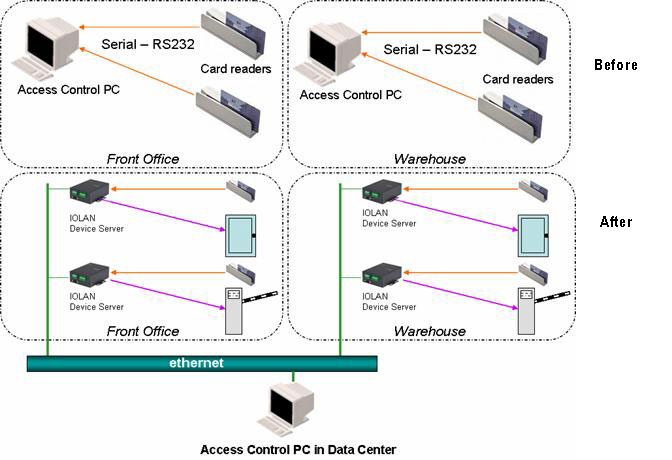 Closed Circuit Television system is a video network for security purpose. It is made up of video cameras placed throughout a building and campus. The video cameras are wired to a headend with coaxial cable. In turn, the headend sends the video signal to television monitoring sets in a security office. A typical CCTV system is shown below.

Sound systems include overhead paging systems and audio systems. Sound systems are used buildings for many people, such as airports, department stores, and sport stadiums. Overhead paging system is used to broadcast messages in a building such as airports and sport stadiums. Audio systems are used in department stores to distribute music and create a pleasant shopping environment.

A typical sound system is composed of the following components: