BER measurements compare digital input and output signals to assess what fraction of the bits are received incorrectly. It is defined as

is the number of bits received in error over time t, and

is the total number of bits transmitted in time t.

The BER essentially specifies the average probability of incorrect bit identification. Thus, a BER of 10-9 means that 1 bit out of every 109 bit is, on average, read incorrectly. If the system is operating at 100 Mb/s – that is, 108 pulses per second – then to receive 109 pulses, the time taken would be

which is the average time for an error to occur. On the other hand, if the BER is 10-6, then, on average, an error would occur every 0.01s, which is unacceptable.

A common BER test set up is shown below.

A custom digital pattern is injected into the system. It is important to use a data pattern that simulates data sequences most likely to cause system errors. A pseudo-random binary sequence (PRBS) is often used to simulate a wide range of bit patterns.

The PRBS sequence is a “random” sequence of bits that repeats itself after a set number of bits. A common pattern is 1023-1 bits in length.

In-service testing is performed on the system during actual operation to give early warning of problems. In one approach, a single 64 kb/s line is taken out of service and a known test pattern injected onto the line. The error performance of this line can be considered representative of all other lines on the system.

Other approaches involve monitoring line-coding violations or trace signals. For example, SONET/SDH standards include a parity byte in the overhead structure that allows frame-based error detection without the need to remove revenue-producing lines from service.

Out-of-service testing involves injecting a known test pattern onto the serial line. The system cannot carry live traffic during the test, so it is best suited for research and development or manufacturing test environments.

The equipment used for out-of-service testing is known as a bit-error-ratio tester, or BERT.

For most PIN receivers, the noise is dominated by thermal noise, which is independent of the signal current. Thus, the noise in bit 1 and bit 0 is the same and in such a case the optimum setting of the threshold value is at the midpoint of the one and zero levels and the BER is related to SNR through the following equation.

where erf represents the error function. For x > 3, a very good approximation to erf( x ) is

Thus, for SNR > 72, the first equation can be approximated by

The following figure shows the dependence of BER on SNR as given by the first equation. 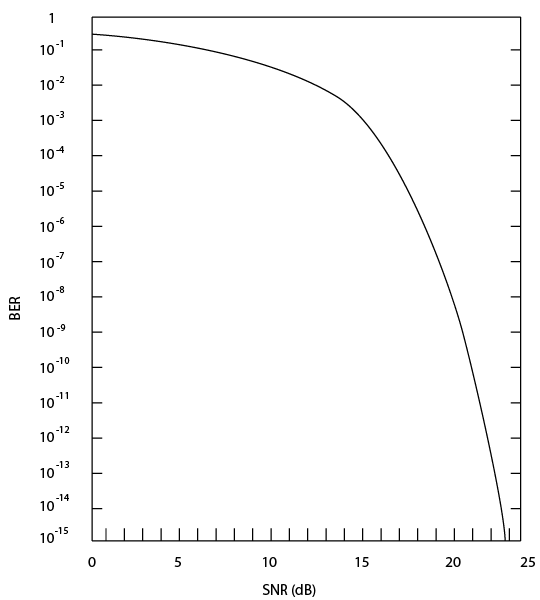 Bit Error Ratio Tester – BERT, is a electronic test equipment used to test the quality of signal transmission of single components or complete systems. It is often used for out-of-service testing as described above. 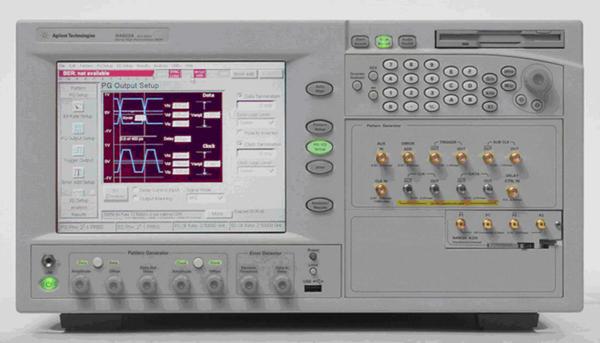 Here is a illustration of the building blocks of a BERT.

The main building blocks of a BERT are:

The pattern generator creates the test pattern together with a separate clock signal at the selected data rate. This pattern is injected into the system under test and received at the error detector’s data input. The error detector includes its own pattern generator that produces an exact replica of the known test pattern and a comparator that checks every received bit against this internally generated pattern. Each time the received bit differs from the known transmitted bit, an error is logged.

The pattern generator and the error detector must operate at identical clock rates and the phase relationship between them must be stable. The easiest way to ensure this is to use the pattern generator’s clock as the clock source for the error detector. This is easy enough when the two units are in close physical proximity – a direct electrical connection can be made between them.

When they are physically separated, for example at opposite ends of a transmission link, a direct connection may not be possible. In this case, the error detector’s clock signal must be recovered directly from the data. Clock recovery itself deserves a separate article.

:: More Information regarding BER and BERT

For more information regarding BER and BERT, you can check out Agilent’s application notes on Bit Error Ratio Test white papers by following the link.