What Is a Active Optical Cable (AOC) Anyway?

Here is the brief definition of AOC:

Active Optical Cable (AOC) is a cabling technology that accepts same electrical inputs as a traditional copper cable, but uses optical fiber “between the connectors”. AOC uses electrical-to-optical conversion on the cable ends to improve speed and distance performance of the cable without sacrificing compatibility with standard electrical interfaces.

A picture is worth a thousand words. Let’s look at one AOC product. The following picture shows a 40Gb/s QSFP+ Active Optical Cable Assembly from Siemon Company. 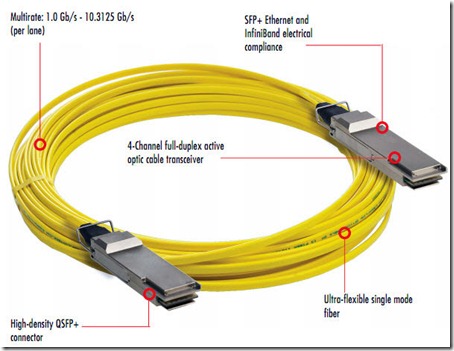 Take a even closer examination and we can see that the active optical cable (AOC) assembly is actually composed of 4 functional parts.

The above product has four single mode fiber optic transceivers per end, each operating at data rates from 1 to 10.3125 Gb/s and supporting a reach up to 4,000 meters. This active optical cable is electrically compliant with the SFP+ interface and supports InfiniBand, Ethernet, Fibre Channel, Myrinet, and other protocols.

There is a more fundamental reason for the invention of AOC products. This is explained in the following section.

Who Invented AOC, and Why?

The first driver came from InfiniBand technology. As InfiniBand data rates rise and data center clusters grow in size, copper cable technology is getting stretched to its limits. InfiniBand Double Data Rate (DDR) of 20 Gigabits per second (Gbps) means that conventional copper cable is limited to an 8 to 10 meter reach.

This may be fine for small clusters, but for larger clusters, this physical link distance makes the physical layout of the cluster becomes a real challenge. Due to the inherent bandwidth-distance limitations of high-speed copper cable assemblies, it is not uncommon for designers to embed amplifiers, signal regenerators, or similar devices within a cable assembly.

Copper cable is heavy and bulky, making it difficult to physically manage the datacenter. And because of the nature of electrical signals, electromagnetic interference (EMI) limits copper’s performance and reliability. If you have a scaled-out high performance cluster, these problems really add up.

So that was why Intel and Luxtera invented Active Optical Cable assemblies to fill the gap.

Intel’s design used Vertical-Cavity-Surface-Emitting-Lasers (VCSELs) and a collection of discrete components. On the other hand, Luxtera’s “Blazar” AOC products used CMOS photonics technology. Luxtera was able to integrate most of the transceiver functionality onto a silicon chip, only the laser and the photodetectors were discrete components.

Active Optical Cable assembly has many potential advantages. If the network equipment is properly designed, it becomes possible to have a common electrical port that can accept either passive copper cable or active copper cable, allowing the user to select the appropriate technology and cost with easy reconfiguration.

The optical connector can be an expensive, precision element (particularly for parallel optical links) due to tight manufacturing tolerances. This is eliminated by permanently attaching the fibers to the optics.

Active Optical Cable assemblies have been designed to support multiple protocols. Most of them are compliant with SFP+ Ethernet and InfiniBand electrical.  Here is what a typical 40 Gb/s QSFP+ (Quad Small Form-Factor Pluggable Plus) AOC supports.

Here is a breakdown of AOC market by applications.

Here is a breakdown of AOC market by Bus Interfaces.

The following picture shows a HDMI Active Optical Cable which can extend A/V signals up to 150 feet. This example shows that AOC is not limited only to data center applications.

Active Optical Cable assemblies revenue is expected to build significant growth over the next five years, according to a new 2010 edition IGI report. Although the economy recession had a hard impact on 2010 AOC sales ($137 million), new designs from late 2009 and expected through 2010 will strongly increase 2011~2012 AOC revenue.

Cumulative AOC revenue for the entire five-year period will be in excess of $7 billion, with over $2.4 billion in 2014 alone.  The following graph shows this forecast report. 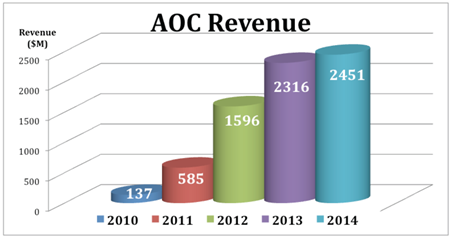 The importance of optical IO connection continues to grow. The market has seen IO cable bandwidth increase at the expense of copper cable length restrictions, with reductions in maximum allowable length for the latest forms of USB, HDMI, and DisplayPort. More and more High Performance Computing (HPC) clients also report preference for optical InfiniBand cables above the 5-7 meters length.

All application users are noting the thicker, bulkier copper cables now required to address bandwidth and power delivery issues, making the opportunity for active optical cable that much stronger. Some supercomputers have shifted from all copper to all AOC.

Here is the AOC revenue forecast by application percentage in 2014. 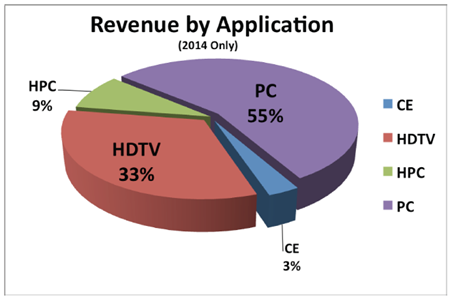 The list below shows the major vendors for Active Optical Cable assemblies.