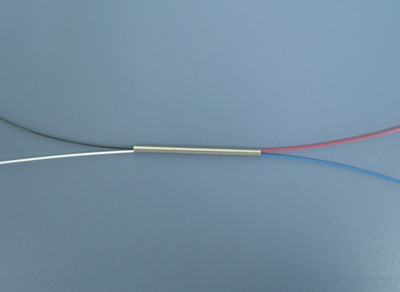 Y coupler is also called tap coupler. This type of coupler simply divides the signal into two outputs. The power distribution ratio between two outputs can be precisely controlled, such as 10/90 percent, 20/80 percent, 30/70 percent, 40/60 percent or 50/50 percent.

T couplers can be cascade to connect multiple terminals on a network, as shown below. The split ratio between two outputs should be 10/90 percent or 20/80 percent in order to have enough power left for next terminal in the link.

Advantages of T and Y Coupler

T couplers are readily available and can be terminated with standard connectors such as SC, ST, FC, LC, etc. You can quickly set up a small network with T couplers cascaded that way.

Star couplers have multiple inputs and outputs. The input and output port number could be the same or not, such as 2×2, 4×4, 8×8, etc. Star couplers distribute the input power uniformly among the output fibers.

The first type is directional, mixing optical signals from all inputs and then distribute them among all outputs, as shown below. These are bidirectional devices because they also can transmit light in the opposite direction.

Note: an optical signal introduced into any input port is distributed to all output ports.

This directional type of star coupler is made by fusing multiple fibers together. As shown below.

The second type of star coupler is non-directional. It takes inputs from all fibers and then distribute them among all fibers, both input and output, as shown below. 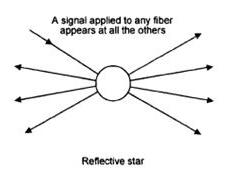 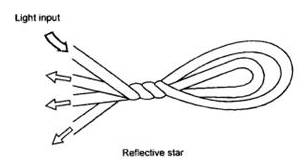 For networks with more then 3 or 4 terminals, using star coupler instead of cascaded T coupler has lower loss. This is because the star coupler requires only one input connector and suffers only one excess loss. The larger number of terminals, the more significant are the loss benefits.

Tree couplers are also called 1xN couplers because they take one or two inputs and split it into multiple outputs. Tree couplers distribute the input power uniformly among the output fibers. Some may combine multiple inputs to one or two outputs, so they are actually combiners. 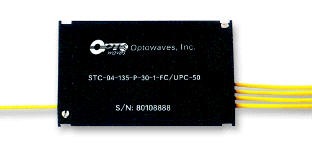 WDM couplers separate optical signals according to their wavelengths. They look like 1×2 T coupler but they do not just split the power blindly but rather split two different wavelengths into two outputs, such as 1310/1550nm and 980/1550nm couplers.

WDM couplers are used to separate wavelengths transmitted for different purposes through the same fiber, such as separating the light pumping an optical amplifier from the amplified signal. They should block wavelengths from entering the wrong output port. 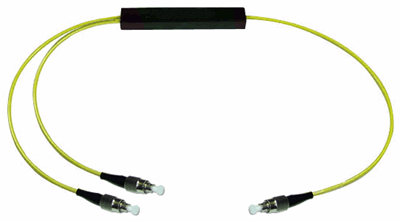 Fused coupler is the most common technology. If the claddings of two or more fibers are partially removed and the fibers are placed in close proximity over some length, then some light will coupler from one fiber into the others. The fraction that couples can be controlled by the thickness of the remaining cladding and the length of the region where the fibers are in proximity. This is shown below.

This type of coupler can be made by taking a group of fibers with the cladding exposed, applying tension, and heating the junction. The coupling fraction is controlled by the amount of tension and the time of heating. The T coupler, Tree coupler and Star coupler can all be made this way.

The details of fused fiber coupler operation depend on whether the fibers are multimode or single mode. In multimode coupler, the higher-order modes leak into the cladding and into the core of the other fiber; the degree of coupling depends on the length of the coupling zone, and does NOT depend on wavelength. So Multimode WDM coupler can NOT be made this way (fused coupler).

In single mode fibers, light transfers between the two cores in a resonant interaction that varies with length. If all the light enters in one fiber, it gradually transfers completely to the other, then transfers back as it travels farther, shifting back and forth cyclically. The distance over which the cycling takes place depends on the coupler design and the wavelength. So Single Mode WDM coupler can be made this way.

The second technique uses mode-mixing rods as the coupling mechanism. A mode-mixing rod is glass rod of a few millimeters diameter with sufficient length to allow the light from all input locations to fully expand to uniformly illuminate the end of the rod. All output fibers are uniformly excited.

In addition to this transmissive configuration, the rod can be cut in half, a mirrored reflecting surface can be applied, and the output fibers can be moved to the input side the device to make a reflective system. 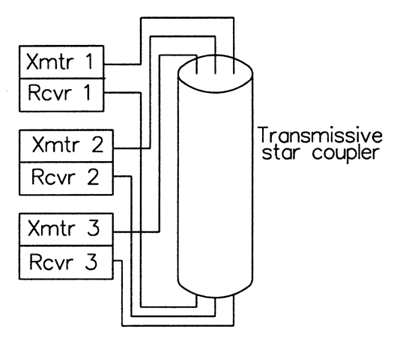 The planar waveguide can be a strip deposited on the top of a flat substrate. Air and the substrate combine to serve the function of the cladding in a fiber. The simplest waveguide is straight lines, but much more complex patterns can be formed, such as a branch or merge, making them the planar waveguide equivalents of fused fiber couplers.

A simple type of waveguide coupler is a Y-shaped structure that divides input waveguide into two outputs. If the output waveguide split at equal angles, the light divides equally between them. 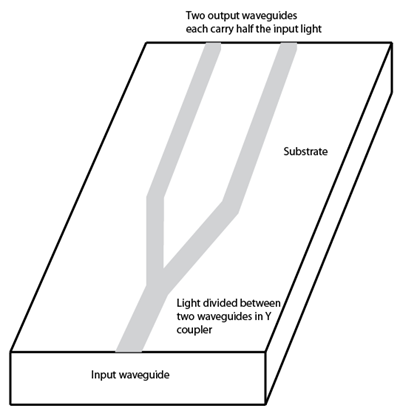