1. Light Pulse Dispersion and the Reasons

In digital communication systems, information is encoded in the form of pulses and then these light pulses are transmitted from the transmitter to the receiver. The larger the number of pulses that can be sent per unit time and still be resolvable at the receiver end, the larger is the capacity of the system.

However, when the light pulses travel down the fiber, the pulses spread out, and this phenomenon is called Pulse Dispersion. Pulse dispersion is shown in the following figure. 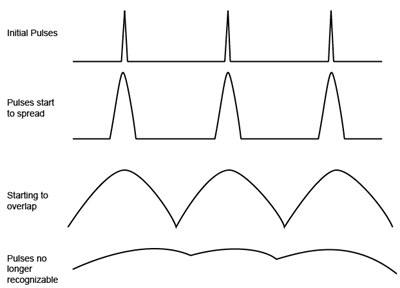 Pulse dispersion is one of the two most important factors that limit a fiber’s capacity (the other is fiber’s losses). Pulse dispersion happens because of four main reasons:

Modal dispersion is only important in multimode fibers.

Many different modes propagate in a multimode fiber. Each of these modes takes a different path and thus different length when traveling down the fiber.

Another factor is the differing propagation constants associated with each mode (each mode’s group velocity).

Both factors contribute to modal dispersion.

Material dispersion is caused by the velocity of light (or its refractive index) being a function of wavelength. Each wavelength takes different amounts of time to propagate the same path.

The following figure shows refractive index versus wavelength in silica.

Any given light source (even a laser) emits over a range of wavelengths as shown below.

Waveguide dispersion is a type of dispersion attributable to the relationship of the physical dimensions of the waveguide and the optical signal.

In optical fibers, this shows as the propagation constant of a mode (and, hence, its velocity) being a function of a/λ. Where a is the core radius and λ is the wavelength.

Unlike material dispersion, even if the refractive indexes of the core and cladding are independent of wavelength, we will still have waveguide dispersion.

PMD is only important in single mode fibers.

In single mode fiber, only one mode can propagate. This mode is actually composed of two distinct polarization modes. The electric fields of the two modes are perpendicular to each other. As shown below. 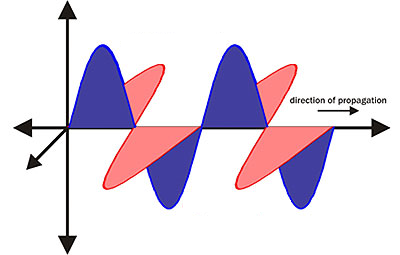 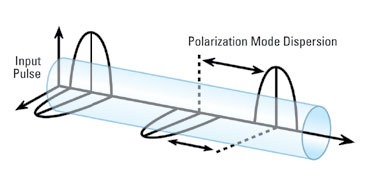 Here we stress that the following analysis uses ray optics. Ray optics modal analysis is only valid when the V number is greater than 10. If the V number is lower, wave theory has to be used.

In a step-index multimode fiber, the center ray with a 0° incident angle travels fastest straight down the fiber.  The ray which is incident at the critical angle travels slowest. The time delay between these two modes is given by

here a is the core radius, λ is the light’s vacuum wavelength.

From above formula, we get

To find V, we use

In grade-index profile multimode fiber, the modal dispersion calculation becomes a little more complicated since we have to account for the inhomogeneous velocity of the light in the fiber as well as the sinusoidal paths as shown above.

Although the higher-order modes need to travel longer path lengths, their average velocity is also higher than the light ray at the center (graded-index fiber has highest refractive index at the center and then gradually decreases toward the cladding).

Here we just give out the conclusion of graded-index multimode fiber modal dispersion. 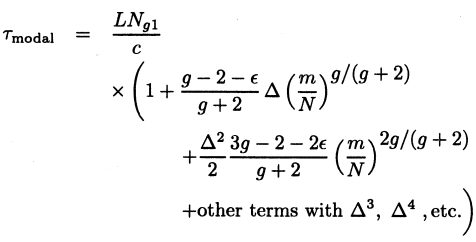 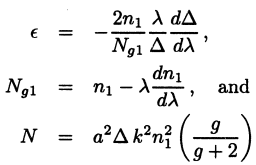 The information on d△/dλ and dn1/dλ is material-dependent and wavelength-dependent and would have to be provided from a study of the materials used in fabrication of the fibers.

From the first equation, if the profile index g is set to an optimum value gopt, the linear term in △ can be eliminated. gopt is given by

From above discussion, we know that graded-index fiber with a optimum index profile gopt can minimize the time delay of the modes. The net delay from the lowest-order modes to the highest order modes is given by

The above figure shows the variation of refractive index n with wavelength λ for fused silica used in current glass fibers. Material dispersion is caused by the velocity of light (or refractive index) being a function of wavelength as shown above.

All light sources (even a laser source) have some degree of spectral width. This means that even in a single mode fiber (since laser source also has some spectral linewidth), longer wavelengths travel faster and arrive earlier than shorter wavelengths at the receiver, and this causes pulse spreading.

When a temporal pulse propagates through a homogeneous medium, its group velocity vg is given by

Thus, the time taken by a pulse to traverse length L of fiber is given by

which is dependent on the wavelength λ. The quantity

is also referred to as the group refractive index since c/N(λ) gives the group velocity.

If the source is characterized by spectral width △λ, then each wavelength component will traverse with a different group velocity, resulting in temporal broadening of the pulse. This broadening is given by

The quantity (λ2d2n/dλ2) is a dimensionless quantity. The above pulse broadening is referred to as material dispersion and occurs when a pulse propagates through any dispersive medium.

where λ is in micrometers (um).

The quantity (λ2d2n/dλ2) characterizes the material dispersion of the fiber and is grouped in the equation. Here is the plot of (λ2d2n/dλ2) for fused silica (the material for current glass fibers).

As shown in “Basic Optics For Optical Fiber”, for a step-index fiber, when 0 < V < 2.405, the fiber becomes a single mode fiber which means that only one guided mode can propagate in the fiber.

The normalized propagation constant b of a mode is defined by

For step-index fibers, b depends only on the V value of the fiber, the above equation can be rewritten as

In the above equation, the ≈ step is concluded based on that n1 is very close to n2 which is true for all practical fibers. Thus we can conclude

The group velocity is given by

In the above equation, n1 and n2 are assumed to be independent of λ.

So for a light source with a spectral width of △λ, the waveguide dispersion is

This is our desired expression for the waveguide dispersion.

For the lowest-order mode(the HE11 mode), our have b(V) as

The following figure shows the variations of b, d(bV)/dV, and V(d2(bV)/dV2) for the fundamental mode as a function of V for a step-index fiber. 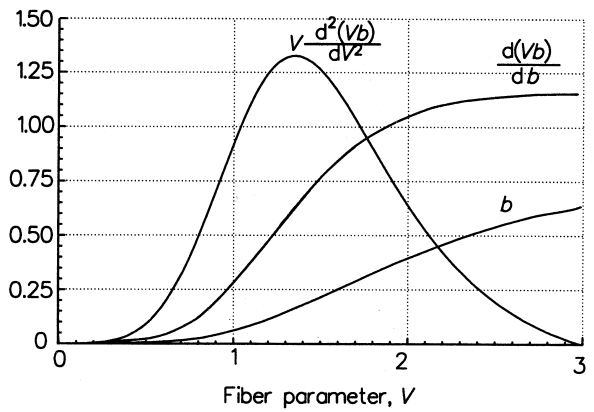 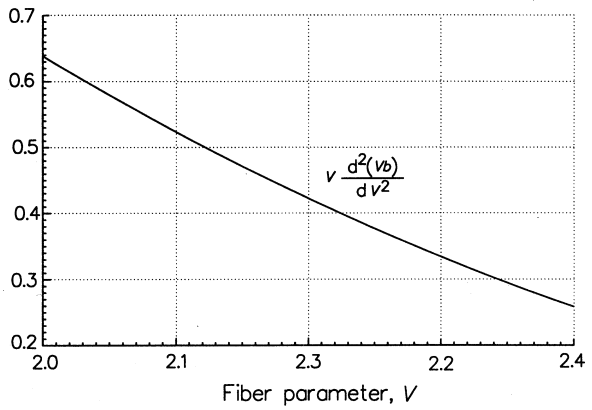 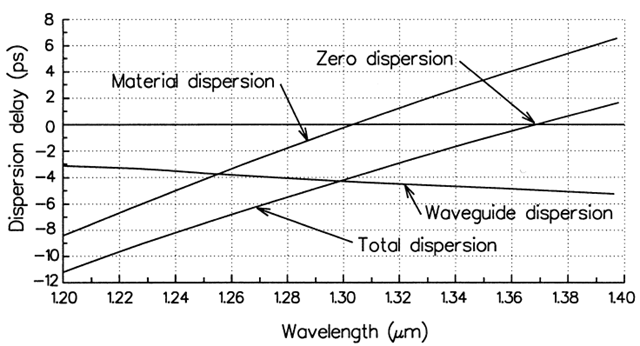 From the above discussion, we know the conventional single mode fiber has zero total dispersion around 1300nm. However, the minimum fiber loss is at 1550nm. If the zero dispersion wavelength could be shifted to the 1550nm region, we could have both minimum loss and very low dispersion. This would lead to very high bandwidth systems with very long (~100km) repeaterless transmission. 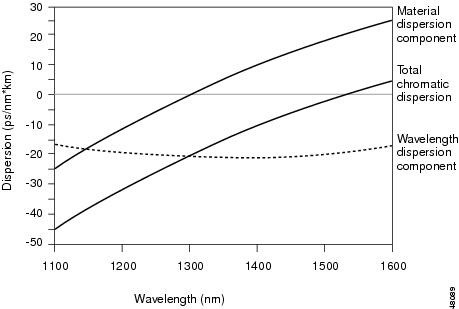 Fiber manufacturers achieved this by adapting the layered core design shown in the following figure. 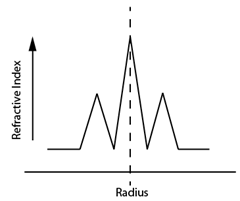 Although this type of fiber (zero dispersion-shifted fiber) worked well for single channel systems, it proved to be unusable for WDM (wavelength-division multiplexing) systems. When multiple optical channels pass through the same fiber at wavelengths where dispersion is very close to zero, they suffer from a type of crosstalk called four-wave mixing. The degradation is so severe that zero dispersion-shifted fiber cannot be used for dense-WDM systems.

ZDSF were installed in some systems but never came into wide use because of four-wave mixing problem.

In order to avoid four-wave mixing problem in WDM systems, non-zero dispersion-shifted fibers were invented. The idea is to move the zero-dispersion wavelength outside the band used for erbium-fiber doped amplifiers.

The name Non-Zero Dispersion-Shifted comes from the fact that the dispersion is shifted to a value that is low – but not zero – in the 1550nm bad of erbium-fiber amplifiers. But you can shift the dispersion to a positive or negative value. This small dispersion is enough to keep signals at closely spaced wavelengths from staying in phase over long distances and thus preventing four-wave mixing.

This is done by using other layered core structures to adjust the waveguide dispersion differently. The following figure shows two refractive-index profile designs. 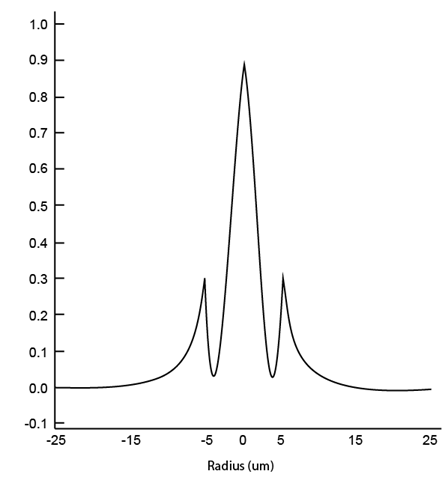 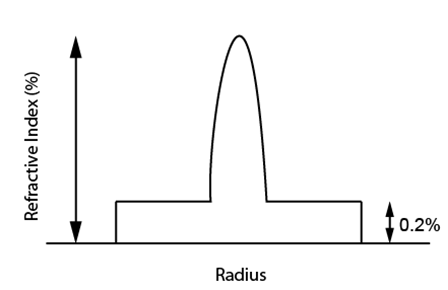 Another way to minimize dispersion effects for dense-WDM systems is to reduce the slope of the dispersion curve. This is called Dispersion-Flattened Fiber (DFF) as shown in the 3rd figure above in pink color.

The reduced dispersion curve slope helps to simplify the task of dispersion compensation for systems with many optical channels, but there are tradeoffs. An important one is that dispersion-flattened fiber designs tend to have smaller mode-field diameter which concentrate optical power in a smaller volume. The increased power density in fiber can cause non-linear effects.

Now, in many countries, tens of millions of miles of CSF (Conventional Single Mode Fiber with zero dispersion near 1300nm) already exist in the underground ducts operating at 1300nm. One could increase the transmission capacity by operating these fibers at 1550nm and using WDM techniques and optical amplifiers. But, then there will be significant residual (positive) dispersion. On the other hand, replacing these fibers by non-zero dispersion-shifted fibers would involve huge cost.

In recent years, there has been considerable work in upgrading the installed 1300nm optimized fiber links for operation at 1550nm. This is achieved by developing fibers with very large negative dispersion coefficients, a few hundred meters to a kilometer, which can be used to compensate for dispersion over tens of kilometers of the fiber in the link.

These fibers tend to have a high-index difference between core and cladding, and often have a small effective area. The following figure shows the refractive-index profile of one design. 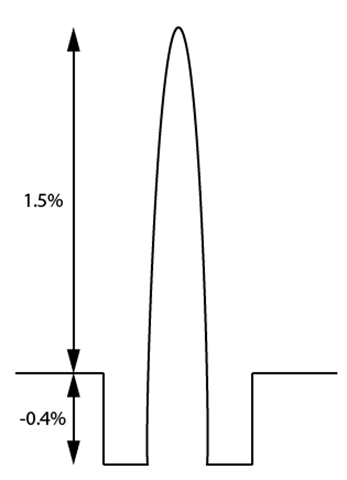