There are two commonly used types of optical modulators in fiber optic communication systems: the electroabsorption modulator (EAM) and the Mach-Zehnder modulator (MZM).

EAM is small and can be integrated with the laser on the same substrate. An EAM combined with a CW laser source is known as an electroabsorption modulated laser. 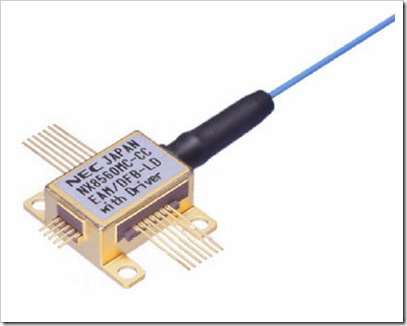 An EML consist of a CW DFB laser followed by an EAM, as shown above. Both devices can be integrated monolithically on the same InP substrate, leading to a compact design and low coupling losses between the two devices.

The EAM consists of an active semiconductor region sandwiched in between a p- and n-doped layer, forming a p-n junction. The EAM works on the principle known as Franz-Keldysh effect, according to which the effective bandgap of a semiconductor decreases with increasing electric field.

Without bias voltage across the p-n junction, the bandgap of the active region is just wide enough to be transparent at the wavelength of the laser light. However, when a sufficiently large reverse bias is applied across the p-n junction, the effective bandgap is reduced to the point where the active region begins to absorb the laser light and thus becomes opaque.

In practical EAMs, the active region usually is structured as an MQW, providing a stronger field-dependent absorption effect (known as the quantum-confined Stark effect).

The relationship between the optical output power, Pout, and the applied reverse voltage, Vm, of an EAM is described by the so-called switching curve. The following figure illustrates such a curve together with the achievable ER for a given switching voltage, Vsw.

Because the electric field in the active region not only modulates the absorption characteristics, but also the refractive index, the EAM produces some chirp. However, this chirp usually is much less than that of a directly modulated laser. A small on-state (bias) voltage around 0 to 1 V often is applied to minimize the modulator chirp. 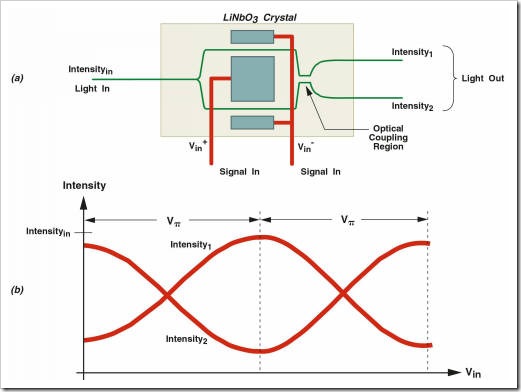 The incoming optical signal is split equally and is sent down two different optical paths. After a few centimeters, the two paths recombine, causing the optical waves to interfere with each other. Such an arrangement is known as an interferometer.

The phase shift, and thus the output intensity, is controlled by changing the delay through one or both of the optical paths by means of the electro-optic effect. This effect occurs in some materials such as lithium niobate (LiNbO3), some semiconductors, as well as some polymers and causes the refractive index to change in the presence of an electric field.

The guided-wave LiNbO3 interferometers used to modulate laser beams was fabricated as early as 1980. LiNbO3 has been the material of choice for electro-optic MZ modulator because it combines the desirable qualities of high electro-optic coefficient and high optical transparency in the near-infrared wavelength used for telecommunications.

LiNbO3 MZ modulator can operate satisfactorily over a wavelength range of 1300 – 1550nm. It has been widely used in today’s high-speed digital fiber communication.

High-speed, low-chirp modulators are needed to take advantage of the wide bandwidth of optical fibers. Modulators have became a critical component both in the high-speed time-domain-multiplexing (TDM) and wavelength-division-multiplexing systems (WDM).

Modulators have been traditionally used to modulate a continuous wave (CW) laser to generate the digital signal to be transmitted through a fiber. High-speed modulator with >40GHz bandwidth has been fabricated. Low drive-voltage operation is the key to brining such modulators into practical use because this eliminates the need for high–power electrical amplifiers.

There is general a tradeoff between the speed and the drive voltage. The modulator chirp must also be taken into consideration in the link design. The design of the modulator and the associated chirp can be used as a degree of freedom to extend link distance.