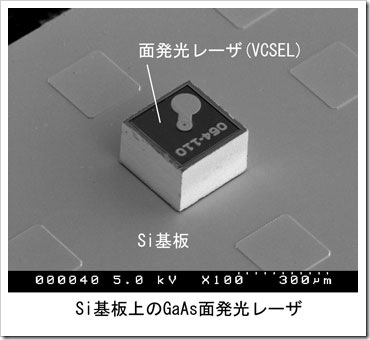 VCSEL stands for Vertical-Cavity Surface-Emitting Laser. It is a type of semiconductor laser diode with laser beam emission perpendicular from the top surface, contrary to conventional edge-emitting semiconductor lasers which emit from surfaces formed by cleaving the individual chip out of a wafer.

A typical VCSEL consists of two oppositely-doped distributed Bragg reflectors (DBR) with a cavity layer between. In the center of the cavity layer resides an active region, consisting of multiple quantum wells. Current is injected into the active region via a current guiding structure either provided by an oxide aperture or proton-implanted surroundings. As the entire cavity can be grown with one-step epitaxy, these lasers can be manufactured and test on a wafer scale. This presents a significant manufacturing advantage.

The VCSEL is, today, an established light source for data transmission in short-distance links, interconnects, and local networks (LANs, SANS, etc.). In these applications, the VCSEL is on-off modulated for the transmission of digital signals. Recent work on analog modulation of VCSELs indicates that VCSELs are suitable light sources also for the transmission of RF and microwave signals in, e.g., radio-over-fiber (RoF) networks used in antenna remoting in cellular systems for mobile communication.