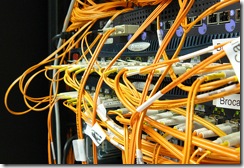 There are two basic types of bends in fiber—microbends and macrobends. As the names indicate, microbends are very small bends or deformities in the fiber, while macrobends are larger bends (see the figure below).

There are two reasons for maintaining minimum bend radius protection: enhancing the fiber’s long-term reliability; and reducing signal attenuation. Bends with less than the specified minimum radius will exhibit a higher probability of long-term failure as the amount of stress put on the fiber grows. As the bend radius becomes even smaller, the stress and probability of failure increase.

The other effect of minimum bend radius violations is more immediate; the amount of attenuation through a bend in a fiber increases as the radius of the bend decreases. The attenuation due to bending is greater at 1550nm than it is at 1310nm—and even greater at 1625nm. An attenuation level of up to 0,5dB can be seen in a bend with a radius of 16mm. Both fiber breakage and added attenuation have dramatic effects on long-term network reliability, network operations costs, and the ability to maintain and grow a customer base.

In general, bend radius problems will not be seen during the initial installation of a fiber distribution system (FDS), where an outside plant fiber cable meets the cable that runs inside a central office or headend. During initial installation, the number of fibers routed to the optical distribution frame (ODF) is usually small. The small number of fibers, combined with their natural stiffness, ensures that the bend radius is larger than the minimum.

If a tensile load is applied to the fiber, the possibility of a bend radius violation increases. The problems grow when more fibers are added to the system. As fibers are added on top of installed fibers, macrobends can be induced on the installed fibers if they are routed over an unprotected bend (see the figure below). A fiber that had been working fine for years can suddenly have an increased level of attenuation, as well as a potentially shorter service life.

Analogue CATV systems are generally designed to optimize transmitter output power. Due to carrier-to-noise-ratio (CNR) requirements, the receiver signal power level is controlled, normally to within a 2dB range. The goal is for the signal to have enough attenuation through the fiber network, including cable lengths, connectors, splices and splitters, so that no attenuators are needed at the receiver.

Having to attenuate the signal a large amount at the receiver means that the power is not being efficiently distributed to the nodes, and possibly more transmitters are being used than are necessary. Since the power level at the receiver is more critical, any additional attenuation caused by bending effects can be detrimental to picture quality, potentially causing customers to be dissatisfied and switch to other vendors.

Since any unprotected bends are a potential point of failure, the fiber cable management system should provide bend radius protection at all points where a fiber cable makes a bend. Having proper bend radius protection throughout the fiber network helps ensure the network’s long-term reliability, thus helping maintain and grow the customer base. Reduced network down time due to fiber failures also reduces the operating cost of the network.