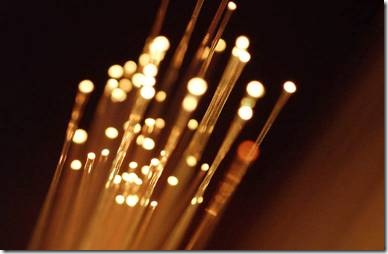 In MCVD a hollow glass tube, approximately 3 feet long and 1 inch in diameter (1 m long by 2.5 cm diameter), is placed in a horizontal or vertical lathe and spun rapidly. A computer-controlled mixture of gases is passed through the inside of the tube. On the outside of the tube, a heat source (oxygen/hydrogen torch) passes up and down as illustrated in the following figure.

Each pass of the heat source fuses a small amount of the precipitated gas mixture to the surface of the tube. Most of the gas is vaporized silicon dioxide (glass), but there are carefully controlled remounts of impurities (dopants) that cause changes in the index of refraction of the glass. As the torch moves and the preform spins, a layer of glass is formed inside the hollow preform. The dopant (mixture of gases) can be changed for each layer so that the index may be varied across the diameter.

After sufficient layers are built up, the tube is collapsed into a solid glass rod referred to as a preform. It is now a scale model of the desired fiber, but much
shorter and thicker. The preform is then taken to the drawing tower, where it is pulled into a length of fiber up to 10 kilometers long.

The OVD method utilizes a glass target rod that is placed in a chamber and spun rapidly on a lathe. A computer-controlled mixture of gases is then passed between the target rod and the heat source as illustrated in the figure below. On each pass of the heat source, a small amount of the gas reacts and fuses to the outer surface of the rod. After enough layers are built up, the target rod is removed and the remaining soot preform is collapsed into a solid rod. The preform is then taken to the tower and pulled into fiber.

The VAD process utilizes a very short glass target rod suspended by one end. A computer-controlled mixture of gases is applied between the end of the rod and the heat source as shown in the figure below. The heat source is slowly backed off as the preform lengthens due to tile soot buildup caused by gases reacting to the heat and fusing to the end of the rod. After sufficient length is formed, the target rod is removed from the end, leaving the soot preform. The preform is then taken to the drawing tower to be heated and pulled into the required fiber length.

Coating the Fiber for Protection

After the fiber is pulled from the preform, a protective coating is applied very quickly after the formation of the hair-thin fiber as shown below. The coating is necessary to provide mechanical protection and prevent the ingress of water into any fiber surface cracks. The coating typically is made up of two parts, a soft inner coating and a harder outer coating. The overall thickness of the coating varies between 62.5 and 187.5 μm, depending on fiber applications.