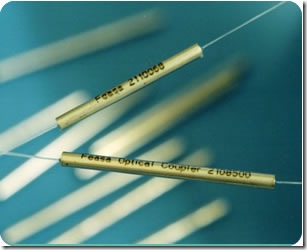 What is a fiber optic coupler?

A coupler is an optical device that combines or splits signals travelling on optical fibers. A port is an input or output point for light; a coupler is a multiport device.

A coupler is passive and bidirectional. Because the coupler is not a perfect device, excess losses can occur.

These losses within fibers are internal to the coupler and occur from scattering, absorption, reflections, misalignments, and poor isolation. Excess loss does not include losses from connectors attaching fibers to the ports. Further, since most couplers contain an optical fiber at each port, additional loss can occur because of diameter and NA mismatches between the coupler port and the attached fiber.

Networks are composed of a transmission medium that connects several nodes or stations. Each node is a point at which electronic equipment is connected onto the network. The network includes a complex arrangement of software and hardware that ensures compatibility not only of signals but also of information.

An extension of the point-to-point is the logical star. This is a collection of point-to-points, all with a common node which is in control of the communications system. Common applications include: switches, such as a PBX, and mainframe computers.

The ring structure has each node connected serially with the one on either side of it. Messages flow from node to node in one direction only around the ring. Examples of ring topologies are: FDDI and IBM’s token ring.

To increase ring survivability in case of a node failure, a counter-rotating ring is used. This is where two rings are transmitting in opposite directions. It requires two fiber pairs per node rather than the one pair used in a simple ring. FDDI utilizes a counter-ring topology.

The logical bus structure is supported by emerging standards, specifically IEEE 802.3. All nodes share a common line. Transmission occurs in both directions on the common line rather than in one direction as on a ring. When one node transmits, all the other nodes receive the transmission at approximately the same time. The most popular systems requiring a bus topology are Ethernet, and MAP, or Manufacturing Automation Protocol.