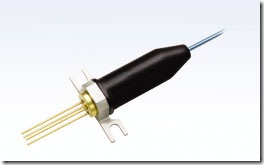 Optical signals begin at the source with lasers or LEDs transmitting light at the exact wavelength at which the fiber will carry it most efficiently. The source must be switched on and off rapidly and accurately enough to properly transmit the signals.

Lasers are more powerful and operate at faster speeds than LEDs, and they can also transmit light farther with fewer errors.

LEDs, on the other hand, are less expensive, more reliable, and easier to use than lasers. Lasers are primarily used in long-distance, high-speed transmission systems, but LEDs are fast enough and powerful enough for short-distance communications, including video communications.

Lasers and LEDs are both semiconductor devices that come in the form of tiny chips packaged in either TO-style cans that plug into printed circuit board or microlens packages, which focus the beam into the fiber.

LEDs used in fiber optics are made of materials that influence the wavelengths of light that are emitted. LEDs emitting in the window of 820 to 870 nm are usually gallium aluminum arsenide (GaAIAs).

“Window,” in this usage, is a term referring to ranges of wavelengths matched to the properties of the optical fiber. Long wavelength devices for use at 1300 nm are made of gallium indium arsenide phosphate (GaInAsP), as well as other combinations of materials.

Lasers provide stimulated emission rather than the simplex spontaneous emission of LEDs. The main difference between a LED and a laser is that the laser has an optical cavity required for lasing. This cavity is formed by cleaving the opposite end of the chip to form highly parallel, reflective, mirror like finishes.

Laser light has the following attributes:

Lasers and LEDs do not emit a single wavelength; they emit a range of wavelengths. This range is known as the spectral width of the source. It is measured at 50 percent of the maximum amplitude of the peak wavelength.