Get Mode Conditioning Cable from here 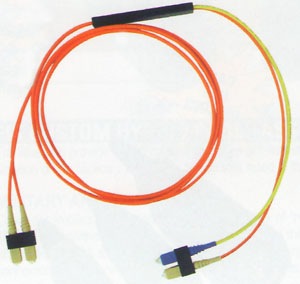 Why Do We Need Mode Conditioning Cable?

The simple answer to this question is: To allow Gigabit 1000 Base-LX single mode equipment, such as routers and switches, to be used on existing 62.5um or 50um multimode cable plants.

Because of bandwidth limitations of multimode fiber, future multi-gigabit fiber optic LAN networks will be based on single mode fiber cables. Actually most new fiber installations include at least some single mode fiber in the cable plant.

Most current LAN networks are composed of about 90% multimode fiber. As the fiber cable plant is upgraded to single mode fiber cables, we must also provide a migration path that continues to reuse the installed multimode cable plant for as long as possible.

However, there are some technical issues involved when using single mode equipment on existing multimode cable plant. The biggest problem is caused by Differential Mode Delay (DMD).

The Technical Side of the Story

Multimode fibers are designed for LED light sources. When LED light is coupled into multimode fiber, it is typically an overfilled launch condition, which results in equal optical power being launched into all fiber modes.

As a result, engineers have discovered that bandwidth measured using overfilled launch condition (LED) is not always a good indication of link performance for laser applications over multimode fiber. This is explained in the below figure.

When a fast rise-time laser pulse is applied to multimode fiber, significant pulse broadening occurs due to the difference in propagation times of different modes within the fiber. This pulse broadening is known as differential mode delay (DMD) and can be large enough to render a gigabit link in operable.

To allow for laser transmitters to operate at gigabit rates over multimode fiber without being limited by DMD, a special type of fiber optic patch cable was designed to “condition” the laser launch and obtain an effective bandwidth closer to that measured by the overfilled launch method.

The point is to excite a large number of modes in the fiber, weighted in the mode groups that are highly excited by overfill launch conditions, and to avoid exciting widely separated mode groups with similar power levels.

When you are connecting your Gigabit 1000Base-LX equipment (single mode) to your multimode cable plant, make sure that you connect the yellow leg of the mode conditioning cable (single mode side) to the transmitter side of your equipment, and the orange leg (multimode) side of the cable to the receiver side of the equipment. It is imperative that this configuration be maintained on both ends.