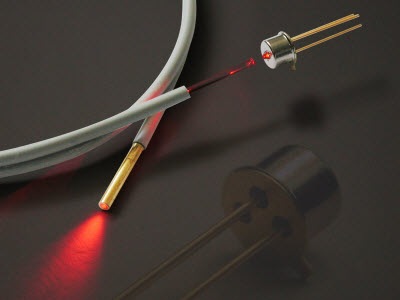 However in 1994, NEC reported that they succeeded in a 2.5Gb/sec data transmission experiment with plastic optical fiber. Thus much more interest has been focused on plastic fiber data link.

Since then, progresses in development of low attenuation PF-polymer-based graded-index plastic optical fiber have vastly improved the bit rate-distance product. And then in 1999, Bell Lab and Lucent made a shocking demonstration of 11Gb/sec data transmission over 100 meters of PF-polymer-based graded-index POF at 1300nm wavelength. This has stimulated even more interest in the development of high bandwidth POF.

The major factor in limiting multimode fibers’ bandwidth is the phenomenon of modal dispersion. This problem has been solved by optimizing the refractive index profile the fiber core region. For plastic optical fibers, this optimization not only reduces modal dispersion but also material and profile dispersion.

For optimum refractive graded-index profile, the index profile is approximated by the power law described below.

n1 and n2 are refractive indices at the center axis and cladding of the fiber respectively; a is the radius of the core and

Also note that the material dispersion of the PF polymer is smaller than that of silica in the near-IR region.

It is reported that the maximum bandwidth of PMMA-based graded-index plastic optical fiber is around 3Gb/sec for 100 meters. This has been dominated by a large material dispersion.

In the case of SiO2-GeO2 based multimode fiber, accurate index profile control for a specified wavelength is necessary to achieve several gigabits per second for 100 and 300 meters. This is because that the wavelength dependence of the bandwidth is much larger than that of the PF polymer and it has been well demonstrated.

In the case of PF-polymer based graded-index plastic optical fiber, the use of VCSELs with a narrow line width enables transmission at more than a gigabit in a wide wavelength range (600nm to 1600nm). This is not true in silica-based multimode fibers with a larger material dispersion than PF polymer.

If the PF-polymer based graded-index POF is made to have an optimum index profile, the data rate can be expected to be much higher than the order of gigabits per second for 1km can be covered in the 800nm to 1300nm wavelength range. This kind of high data rate cannot be achieved with silica-based multimode fibers in the wide-wavelength range.

Look Into The Future

High optical and mechanical quality cannot be realized by polymer but by inorganic materials in the photonics field. However, PF-polymer based graded-index plastic optical fiber potentially had much higher bandwidth than silica because the material dispersion of the PF polymer was lower than that of silica.

The attenuation of PF-polymer based GI POF can be decreased to less than 1dB/km which is comparable with that of the silica-based fiber. The low attenuation and low material dispersion of the PF-polymer based graded-index POF present a potential solution to the continuously increasing bandwidth demand in our world.