More than a dozen types of fiber optic connectors have been developed by various manufacturers since 1980s.  Although the mechanical design varies a lot among different connector types, the most common elements in a fiber connector can be summarized in the following picture. The example shown is a SC connector which was developed by NTT (Nippon Telegraph and Telephone) of Japan. 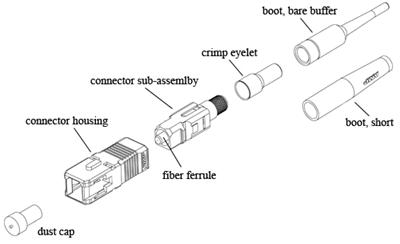 Elements in a SC connector

SC connector is built around a long cylindrical 2.5mm diameter ferrule, made of ceramic (zirconia) or metal (stainless alloy). A 124~127um diameter high precision hole is drilled in the center of the ferrule, where stripped bare fiber is inserted through and usually bonded by epoxy or adhesive. The end of the fiber is at the end of the ferrule, where it typically is polished smooth.

The ferrule is then assembled in the SC sub-assembly body which has mechanisms to hold the cable and fiber in place. The end of the ferrule protrudes out of the sub-assembly body to mate with another SC connector inside a mating sleeve (also called adapter or coupler).

Fiber cable and strength member (aramid yarn or Kevlar) are crimped onto the connector sub-assembly body with a crimp eyelet. This provides the strength for mechanical handing of the connector without putting stress on the fiber itself.

Unlike electronic connectors, most fiber optic connectors don’t have jack and plug design. Instead a fiber mating sleeve (adapter, or coupler) sits between two connectors. At the center of the adapter there is a cylindrical sleeve made of  ceramic (zirconia) or phosphor bronze. Ferrules slide into the sleeve and mate to each other. The adapter body provides mechanism to hold the connector bodies such as snap-in, push-and-latch, twist-on or screwed-on. The example shown above are FC connectors with a screwed-on mechanism.

Both examples shown above are for single fiber cable (simplex) which is easy to install. However there are also duplex and multi-fiber connector designs. Below are loosely divided family types of fiber connectors which sometimes overlap.

It is the most popular connector for multimode fiber optic LAN applications . It has a long 2.5mm diameter ferrule made of ceramic (zirconia), stainless alloy or plastic. It mates with a interconnection adapter and is latched into place by twisting to engage a spring-loaded bayonet socket. 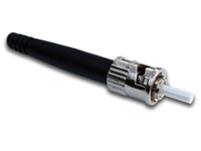 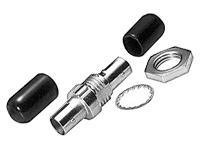 FC connector also has a 2.5mm ferrule (made of ceramic (zirconia) or stainless alloy) . It is specifically designed for telecommunication applications and provides non-optical disconnect performance. Designed with a threaded coupling for durable connections. It has been the most popular single mode connectors for many years. However it is now gradually being replaced by SC and LC connectors.

SC was developed by NTT of Japan. It is widely used in single mode applications for its excellent performance. SC connector is a non-optical disconnect connector with a 2.5mm pre-radiused zirconia or stainless alloy ferrule. It features a snap-in (push-pull) connection design for quick patching of cables into rack or wall mounts. Two simplex SC connectors can be clipped together by a reusable duplex holding clip to create a duplex SC connector.

FDDI connector – Duplex only, multimode only.

FDDI connector utilizes two 2.5mm ferrules. The ferrules are sheltered from damage because of the fix shroud that has been constructed in the FDDI connector. FDDI connector is a duplex multimode connector designed by ANSI and is utilized in FDDI networks. FDDI connectors are generally used to connect to the equipment from a wall outlet, but the rest of the network will have ST or SC connectors.

A number of small form factor fiber optic connectors have been developed since the 90s’ to fill the demand for devices that can fit into tight spaces and allow denser packing of connections. Some are miniaturized versions of older connectors, built around a 1.25mm ferrule rather than the 2.5mm ferrule used in ST, SC and FC connectors. Others are based on smaller versions of MT-type ferrule for multi fiber connections, or other brand new designs. Most have a push-and-latch design that adapts easily to duplex connectors. 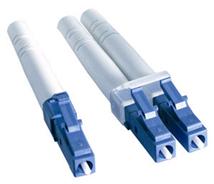 MU connectors and adapters were developed by NTT, and have push-pull mechanism. They are called “mini SC” and are more popular in Japan. Applications include high-speed data communications, voice networks, telecommunications, and dense wavelength division multiplexing (DWDM). MU connectors are also used in multiple optical connections and as a self-retentive mechanism in backplane applications. 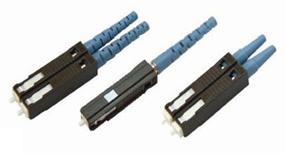 Externally a E2000 connector looks like a miniature SC connector. The connector is easy to install, with a push-pull latching mechanism which clicks when fully inserted.

It features a spring-loaded shutter which fully protects the ferrule from dust and scratches. The shutter closes automatically when the connector is disengaged, locking out impurities which could later lead to network failure, and locking in potentially harmful laser beams. When it is plugged into the adapter the shutter opens automatically.

MT-RJ  connector, duplex only, multimode only. (not 1.25mm ferrule, but rather a two-fiber ferrule design derived from MT).  Overall size is about the same as a RJ45 connector.

MT-RJ connectors are used in intrabuilding communication systems. Since they are designed as plugs and jacks, like RJ-45 telephone connectors, adapters can be used with some designs, but are not required for all. 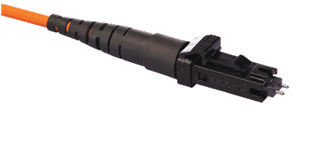 VF-45 connector (3M Volition), duplex only. No ferrules at all. Plug and jack versions.

VF-45 (3M Volition) is designed by 3M. VF-45 features plug and jack design without the need of adapters. VF-45 plug is inserted into the socket(jack) at a 45 degree angle, pressing a pair of fibers into V-grooves inside the socket. This design eliminates the need for expensive ferrules thus reduces connector costs. 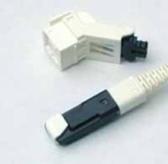 Opti-Jack connector is a version of Fiber Jack connector design from Panduit Corporation, that provides a snap-lock plug and socket for a pair of fiber cables. It enables fibers to be quickly plugged and removed in a manner similar to RJ-45 connectors. It is designed around two ST-type 2.5mm ferrules in a package the size of a RJ-45.
Fiber Jack is a duplex fiber-optic connector standardized by the TIA (FOCIS-6). TIA stands for Telecommunications Industry Association. Fiber Jack allows two fibers to mate in a snap-lock type of plug and socket similar in size and convenience to an RJ-45 connector. 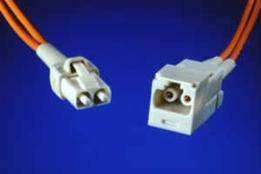 MTP and MPO are compatible ribbon fiber connectors based on MT ferrule which allow quick and reliable connections for up to 12 fibers. They are intended for installations that require many fiber connections. Up to 12 fibers in a ribbon are stripped to 125um cladding and inserted into 250um spaced parallel grooves. The ferrule also includes two 0.7mm diameter holes, running parallel to the fibers on the outer side of the ferrule. These two holes hold precision metal guide pins which align the fibers with tight tolerances. 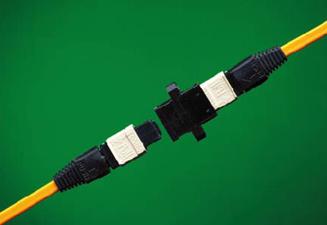 SMA 905 and 906 connectors make use of threaded connections and are ideal for military applications because of their low cost multimode coupling.

SMA 905 and SMA 906 multimode connectors are available with stainless alloy or stainless steel ferrules. The stainless alloy ferrule may be drilled from 125um to 1550um to accept various fiber sizes.
SMA 906 ferrule has a step, as shown in the following picture, which requires a half sleeve to be installed when mating a SMA 906 connector with SMA 905 mating sleeves. 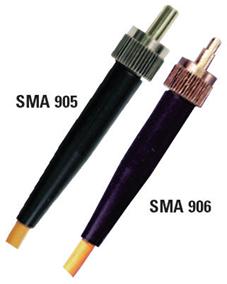 Biconic Connector. Simplex only. Available in single mode and multimode.

D4 connectors are made from a 2.5mm diameter ceramic (zirconia) ferrule for durability. They have a high-performance threading mounting system and a keyed body for repeatability and intermateability.